About a 1 1/2 yrs ago I was in Spokane, WA. to do some aviation training. While there, I took a trip over to Sandpoint, ID where the aircraft Quest Kodiak is produced. The Kodiak is a small turboprop aircraft designed for the kind of flying MAF does a fair amount of - especially in Indonesia, you can read my post about it here if you are a keener.

I happened to visit the Quest factory when they had two future MAF planes taking shape, one of them being serial #58. Here's a couple assembly line pic's below: 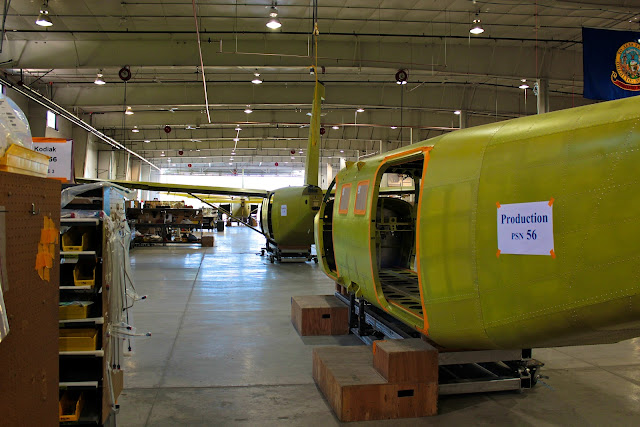 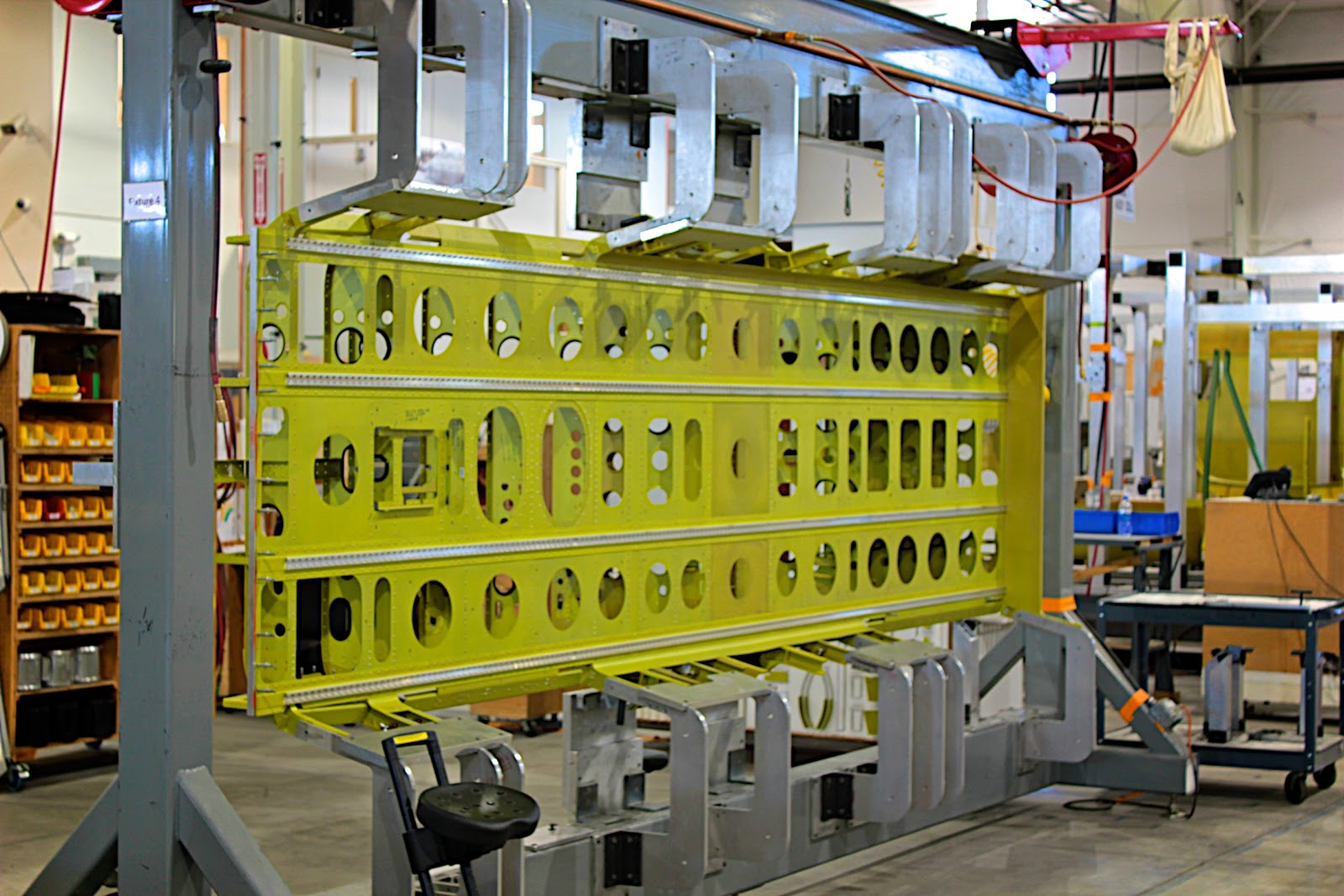 The picture above is of the fuselage floor structure of the Kodiak. The four long silver horizontal lines are seat rails which the cockpit and cabin seats attach to, and also act as tie-down points for cargo of all shapes and sizes. This is the main fuselage structure that a lot of other important pieces end up attaching to ( like landing gear, wing struts, etc.) and it is where the Kodiak starts taking shape.

I am about 98% sure this particular chunk of airplane is the beginnings of serial #58. What's so special about #58? Well, it just arrived here in Tarakan last week as our 2nd MAF Kodiak! 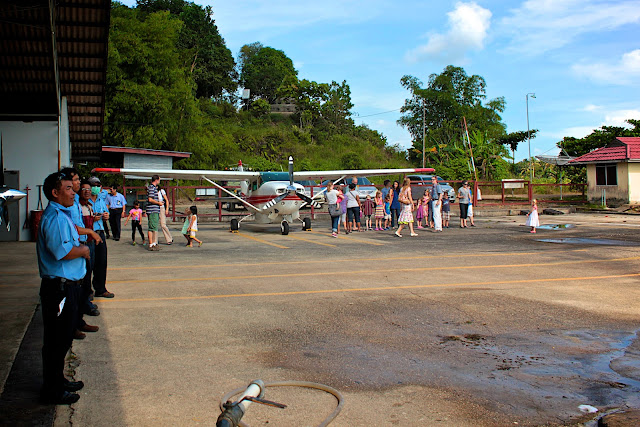 All of us MAFer's gathered at the hangar to welcome the new Kodiak as it arrived from Papua.

Papua, Indonesia? Why Yes! After leaving the factory in Sandpoint, #58 and one other of it's close siblings went to Nampa to receive some MAF modifications, and also to be fitted for a ferry flight to the other side of the world. After Nampa, next stop was Papua, (I think, as I might be skipping a step or two) and that is where the two brand spanking new planes sat until they cleared all the paperwork required to legally make them flyable in Indonesia.

One plane stayed with the MAF program in Papua, and #58 headed to Kalimantan! 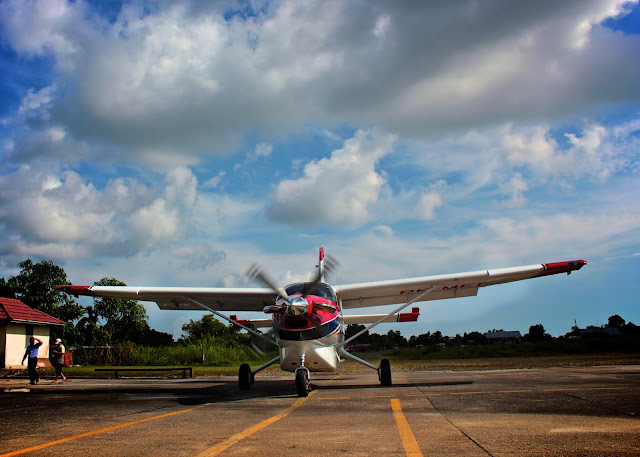 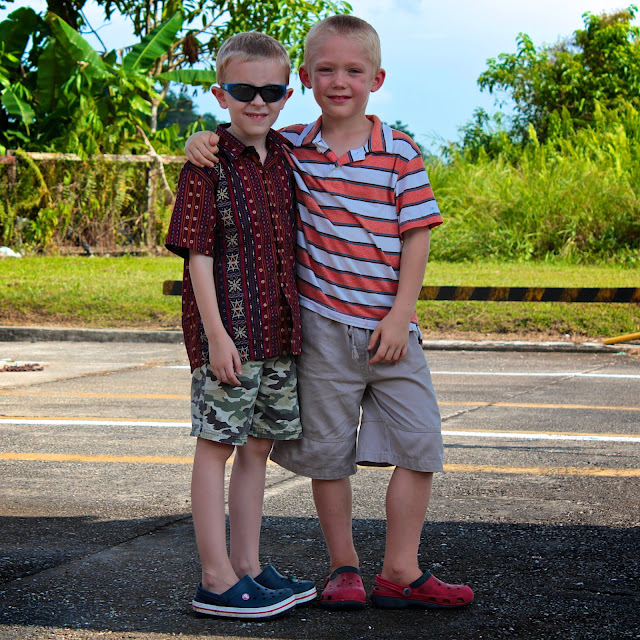 Luke catching some shade under a wing with his buddy Sean. 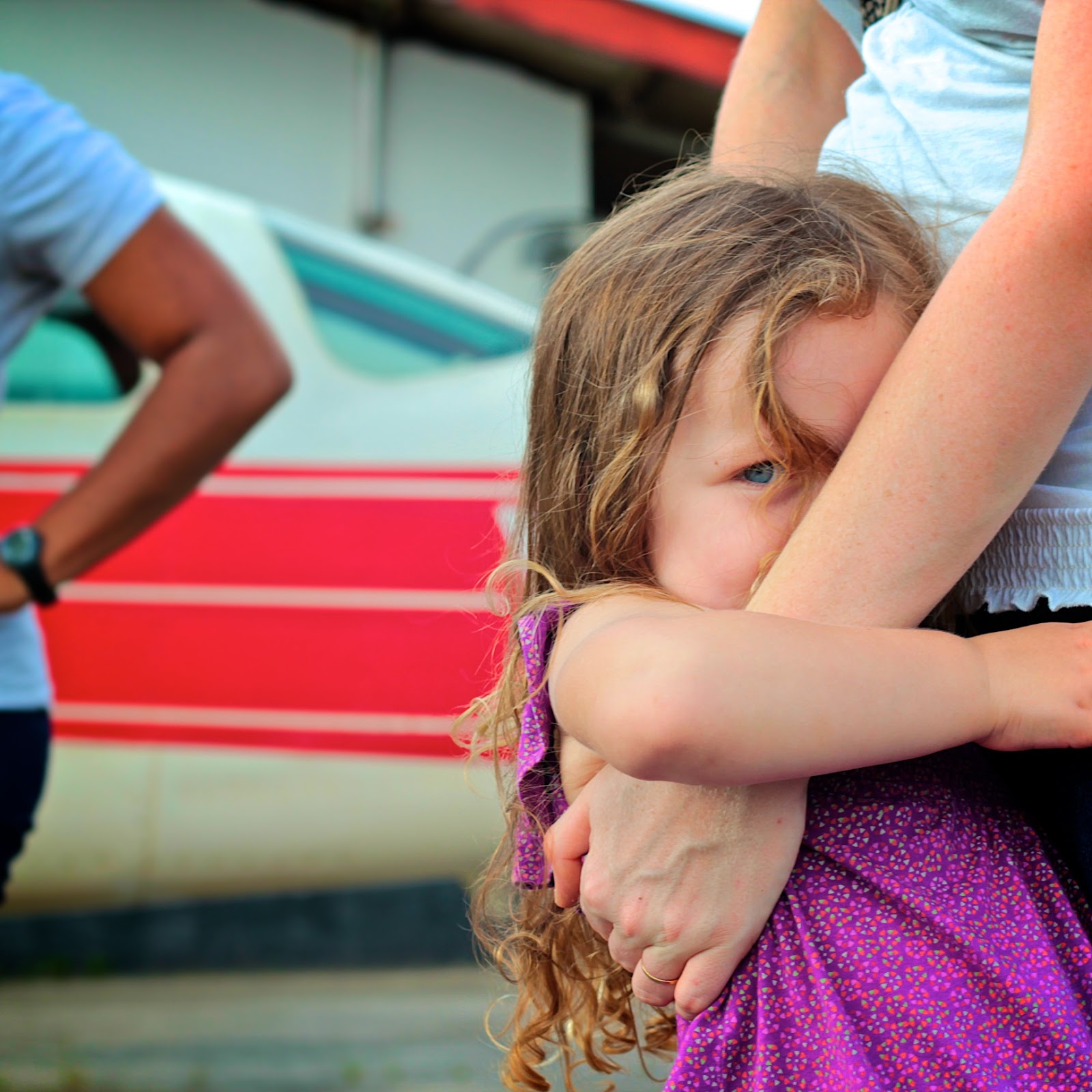 Helena catching a hug from Mom. 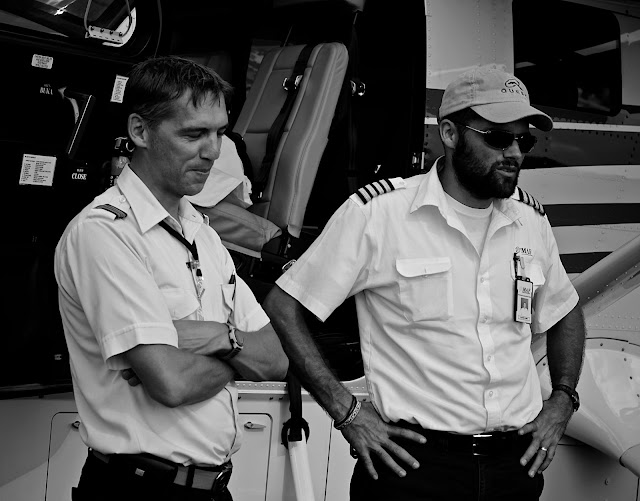 Two tired looking pilots. Sentani, Papua to Tarakan, North Kalimantan is quite a haul in a Kodiak. It's like going from Vancouver to like Winnipeg...or Thunder Bay, something like that, but with large amounts of ocean underneath the plane instead prairie and airports. 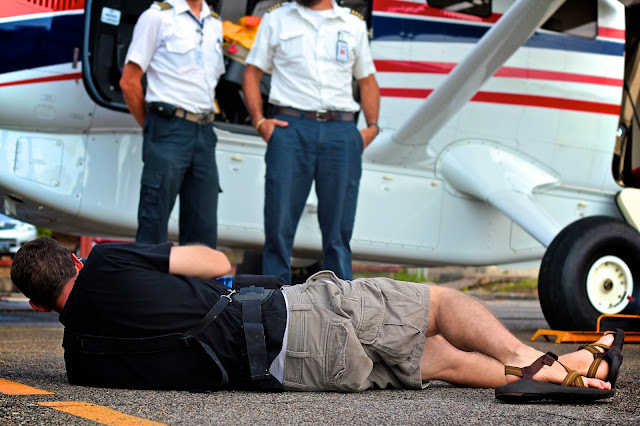 Here's a photo of a guy taking a photo. Very artistic. The photographer is Tripp Flythe, for some awesome photos & great posts check out their family blog here. 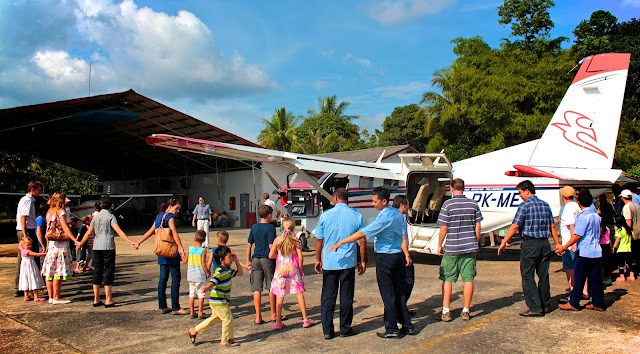 The coolest part of the arrival is being able to all gather around the plane and pray, a dedication of this plane to the service of Jesus Christ.

It would be so neat to one day look back and see all the ways this plane is used to help people.  Who knows how many thousands of flight hours, landing & take-offs, unloading and loading with passengers and cargo, hours spent with maintenance in the hangar, mornings washing & fuelling, that it will rack up. And, how many sick people transported to a hospital, local churches supported, families moved, pigs that get to ride in the cargo pod, the list goes on! 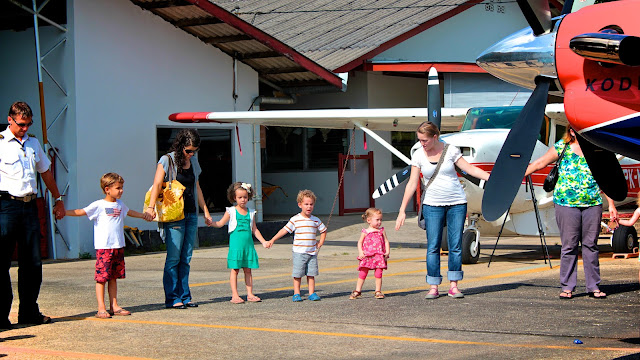 Check out this one more link from Dave Forney (one of the pilot's who brought the plane from Papua) for some awesome photos of the flight over.

The other day, while on a walk home from the local grocery store, Amy heard some whimpering coming from a gutter maybe a block from our house. So, she and the kids took a peek and found a couple puppies all tangled up in weeds. With the help of an Indonesian man, she got them out, into a bag, and brought them home!

We had been talking about getting a dog anyways, so saving a couple furry little fellers from a bleak outlook sounded pretty good to us & the kids, Luke especially! 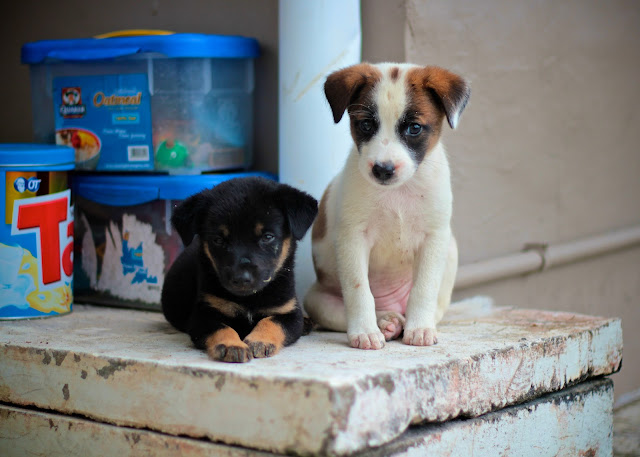 Meet Moe and Roe! The white one was named "Moe" after Moses since she was tangled up in the weeds and was rescued...That's before we new she was a she. "Roe" is short for "Rocky the Robot" - the name ceremoniously given by Simon. 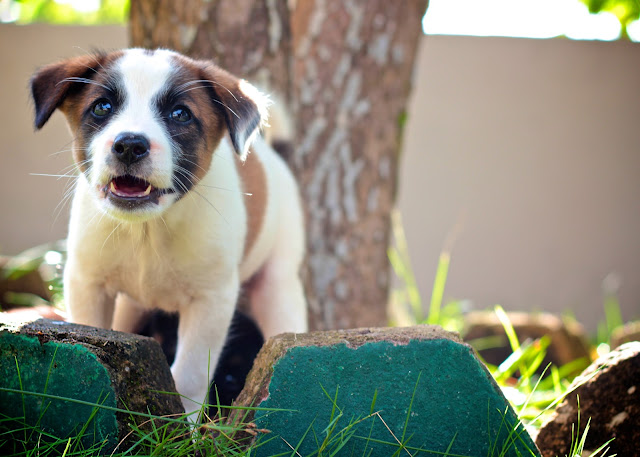 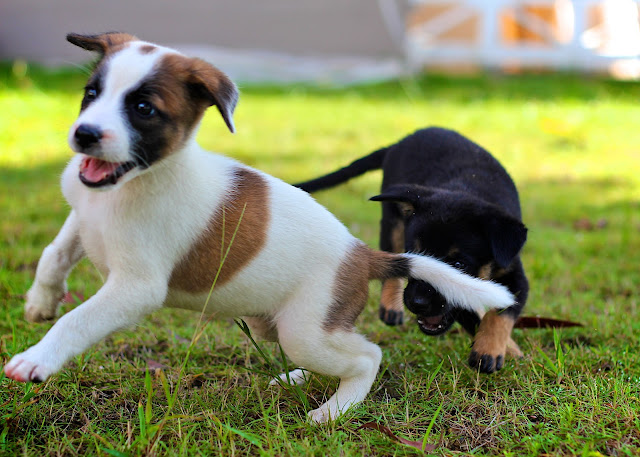 Like any self respecting puppies, they are very playful. They also have quite the appetites, which I would expect since they come from a long healthy line of stray garbage eating dogs. (We still see their Mom & Dad everyday making a mess of the garbage at the local "transfer station" just down the road from our house. By "transfer station" I mean the following: You throw your garbage in the little concrete walled type garbage building, and through various means most of your garbage is then "transferred" all over the place...Usually as about as far as a dog is willing to run off with a garbage bag in it's mouth before deciding to splay the contents all over the ground for everyone to smell and see. But I wouldn't want to get too descriptive because this is all tasteful content for a future post!) 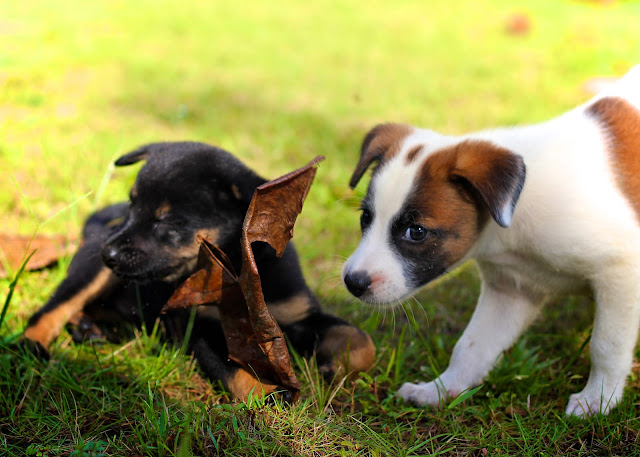 Moe and Roe playing with a leaf...Better than eating my shoes, which they are already fully capable of doing. 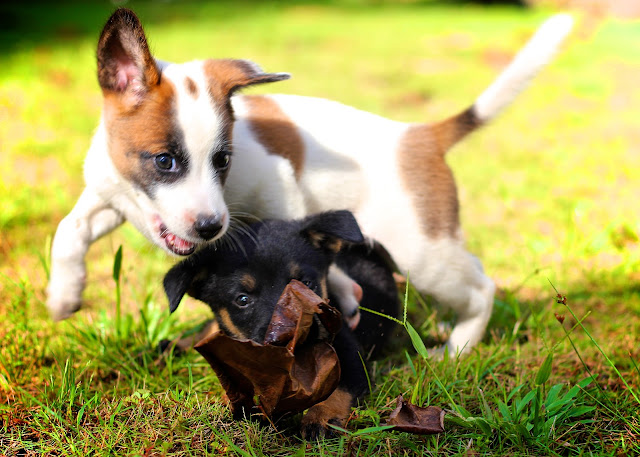 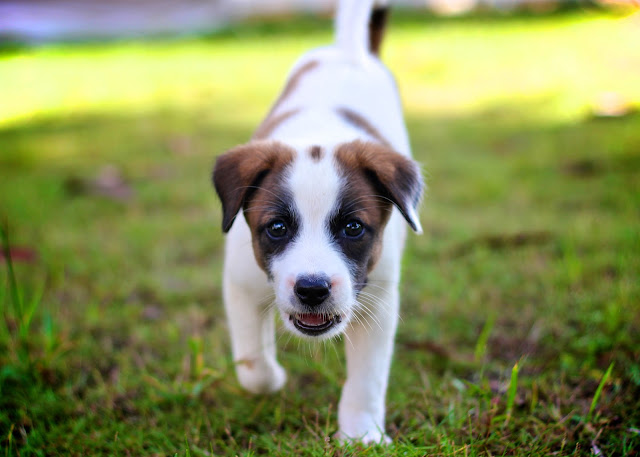 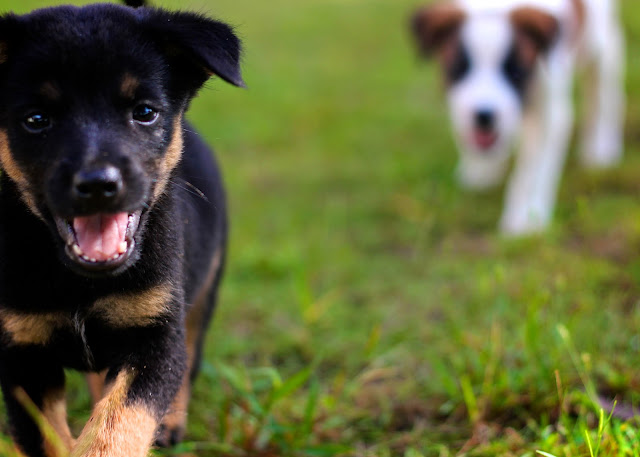 Yes, we've given them worm medicine, etc. But we still make Simon wash up after seeing him "help" Roe do all the actions to "When your happy and you know it clap you hands".
Posted by Unknown 3 comments:

There's a little hill just down the road from our house, it is where Luke's school is located. Sometimes we get up there for a family walk. 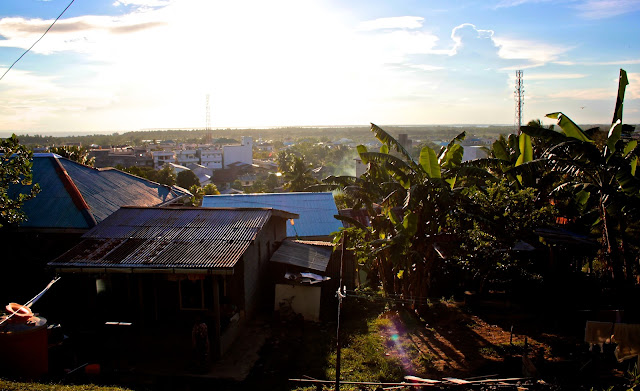 A view of Tarakan from the school road. 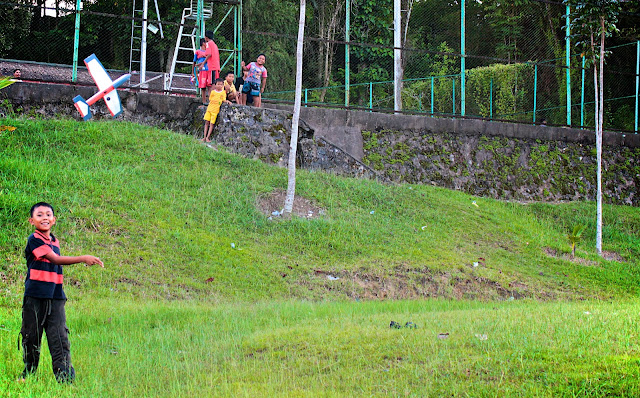 Kids playing with a toy airplane near some tennis courts. 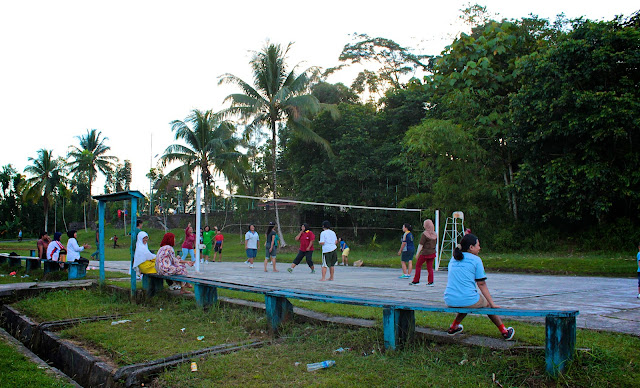 An all ages game of volleyball was in progress, so I thought I'd snap a couple quick pictures... 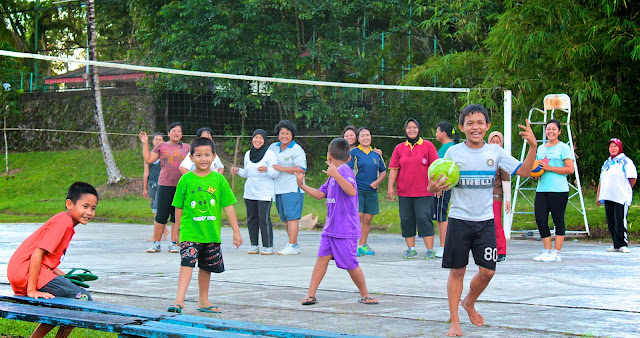 ...But of course it doesn't take long before everyone is lining up, making jokes, and yelling for more pictures! 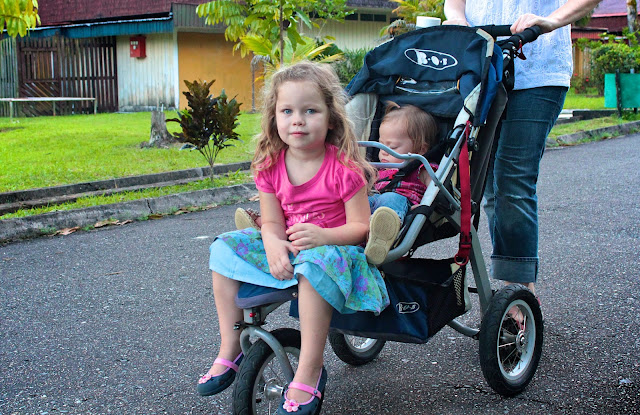 When Charlotte is sleeping, it is definitely easier for Helena to hitch a ride, as she doesn't get kicked in the back and yelled at :) 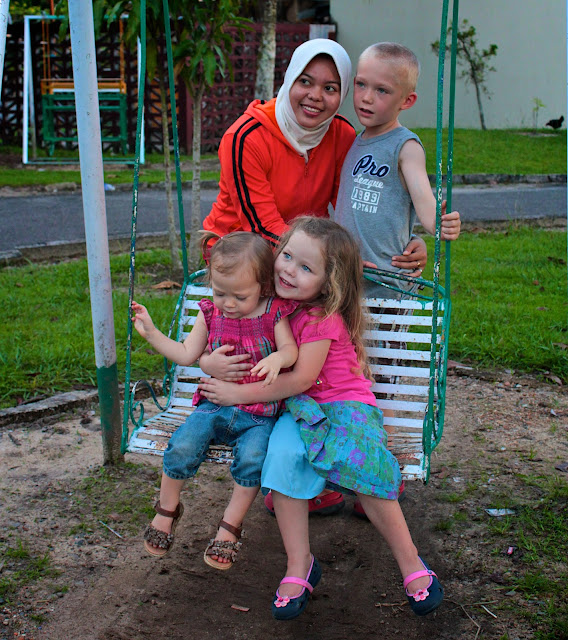 It would almost be weird to go out and about with the kids and not get asked - at least once - by a passerby to get their picture taken together with some of the kids. 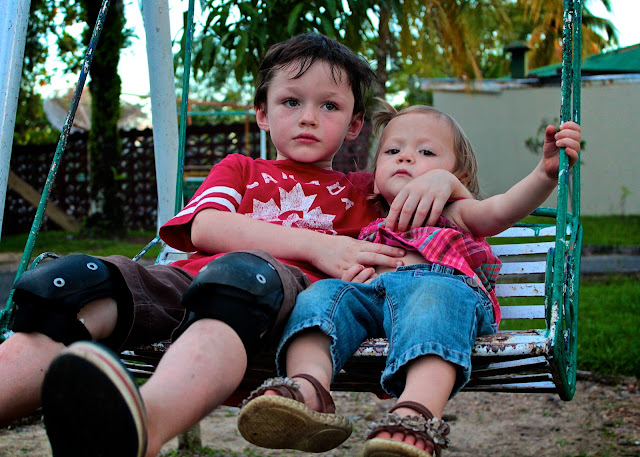 Si and Charlotte, two peas in a pod hangin' out! 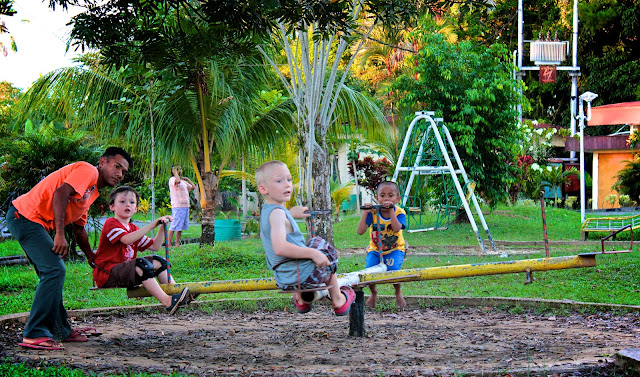 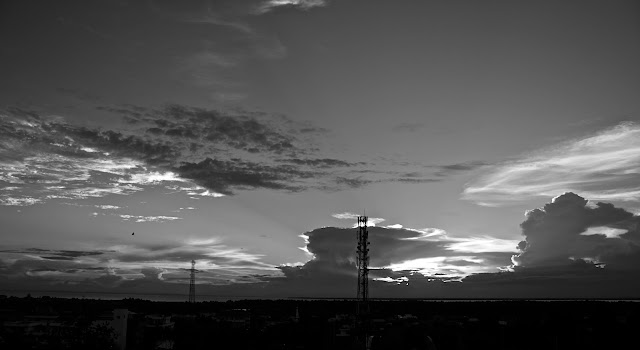 Not the greatest picture to show it, but it is very common this time of year to have both blue sky on one side and storm clouds building on the other. Pretty cool!
Posted by Unknown No comments: