Well here is my first blog post from Island of Tarakan! But instead of feeding you pictures of pythons, monitor lizards, airplanes and wrenches, I better I first must get caught up on the eventful last few weeks.

What have we been up to!? A flurry of events, a whirlwind of experiences, a (insert metaphor here) of activities. Our family's time in language school and in Central Java came to a close, and we've successfully moved to the town of Tarakan, on the Island of Tarakan. I'll briefly say now, being here has been just awesome, and I definitely plan to write more posts on just what this means to our family in the near future.

But first...Salatiga, where so many awesome friends of ours still remain! We were truly thankful for how down the stretch our MAF friends helped us pack our container, lent us scooters and cars when we had only feet, watched our kids when we were packing, and helped out wherever they could. What a blessing!

The morning we left was quite emotional as we said good bye to our house helpers who had become like an extension of our family. We will truly miss them, both Amy and I, and the kids! Charlotte had spent a few hours each week day with Ibu Yani for the last year. As we left town, Luke cried and cried, as he knew he would not see his friends again.

But we have felt the hand of God watch over our family and help us along, and I don't say that just to tidy things up with a nice little cliche saying. Just today Luke told me how he loves it here in Tarakan, and loves his new school! I instantaneously thought of that morning we travelled to the airport, and how I didn't know what to say or how to comfort him, but could only hug him. I'm so thankful that God gave Luke a love for his new school and friends. Us being here is not just about Amy and I, t's about all 6 of us. But more on here (as in Tarakan) and how the other kids are doing later! 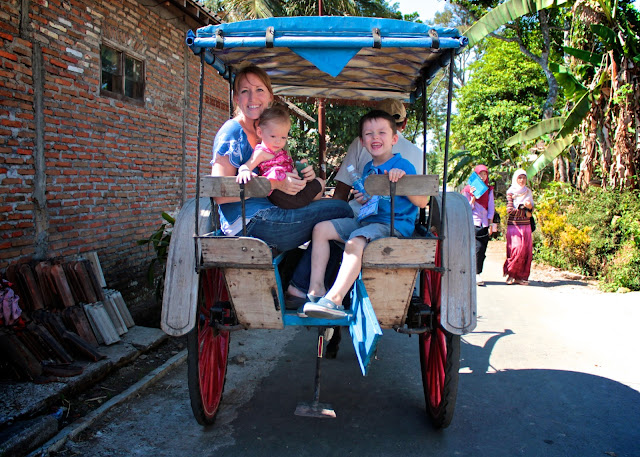 Above Amy and some of the kids have newly arrived home in Amy's favourite Javanese mode of mass transit: a Dokar (horse buggy).You can get a ride from down town to your front door for maybe $2.50-$3.00, which is relatively expensive compared to the Angkota (mini bus) which cost maybe $0.60 for Amy and 3 kids to get home. We have yet to see a horse on the island of Tarakan. There are plenty of cows, well, there were a lot of cows until a couple days ago which was the religious holiday Idul Adha...but maybe I'll save that one for next year. 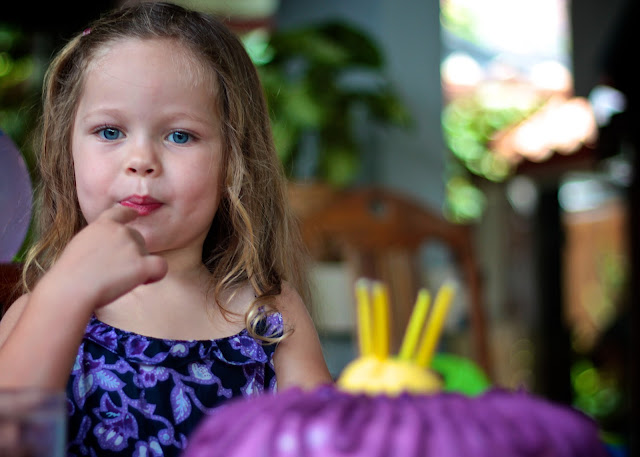 To streamline events in our last few days before leaving, Helena had her 4th birthday party at the same time as our MAF goodbye get-together. Jacinda Basinger kindly baked a purple cake for her, which I must say was delicious! Above, Helena is pre-tasting the cake to see if she agrees with me.

Getting together with the other MAF families just before someone leaves to their program on another island is a bit of tradition in language school and pretty cool. We get to say goodbye, pray together, and kind of "send" the family on to the next phase of what God has called them to do in Indonesia. As hard as it is to say goodbye, I think we're all glad that we are not indefinitely meant to be in some sort of language school purgatory:) 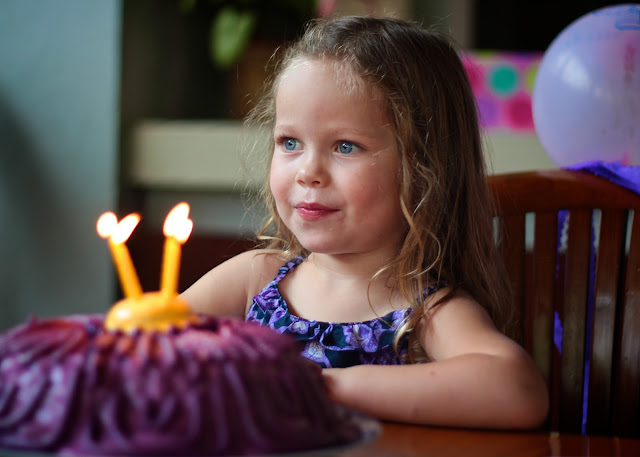 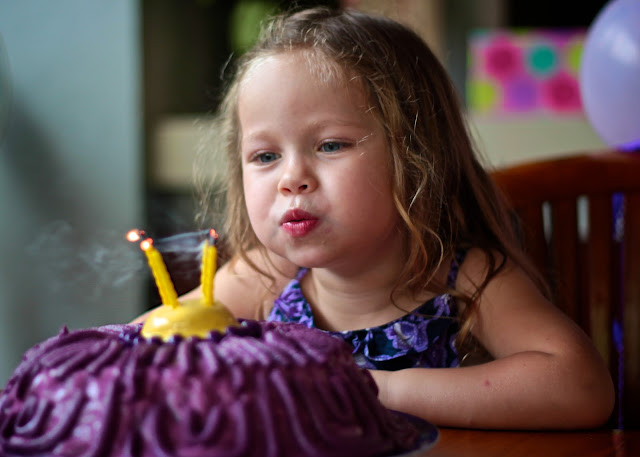 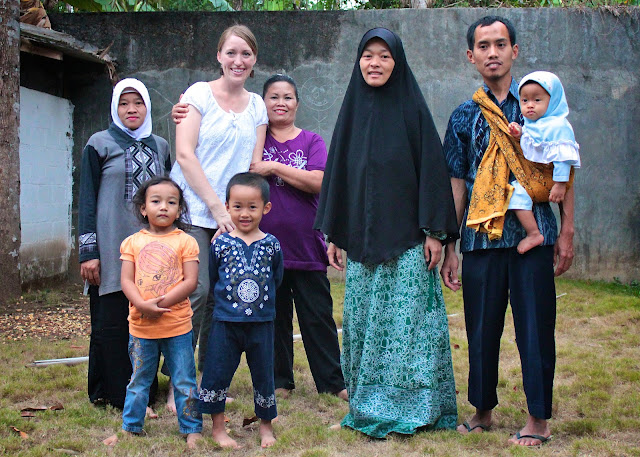 Our last week in Salatiga involved a lot of good-byes, and in our neighbourhood was no exception! It is cultural to visit all your neighbours and "berpamitan" (give farewell / say goodbye). Above and beyond attending neighbourhood meetings and giving a little speech, for Amy this also meant making something to eat for about a dozen guests who came over one day before we left. If I were back in Canada, I would think, what!? Our house is in boxes, and we're trying to get out the door...could we pick a better time?

Okay, I did kind of think that, a bit. But we also laughed a bit about it too. We are, after all, on the other side of the world. We also know that here it is the way folks here show respect, and it is actually pretty neat. It also means that they really did like us! It is pretty cool how they accepted us into their neighbourhood, and having these relationships is another example of how we have seen the hand of God provide for us in this last year. Despite all our business and some stressful moments, He brought people along from our neighbourhood at the right times that required little effort to build relationships with. Our hope and prayer is that, despite ourselves, Christ was seen in us by them. 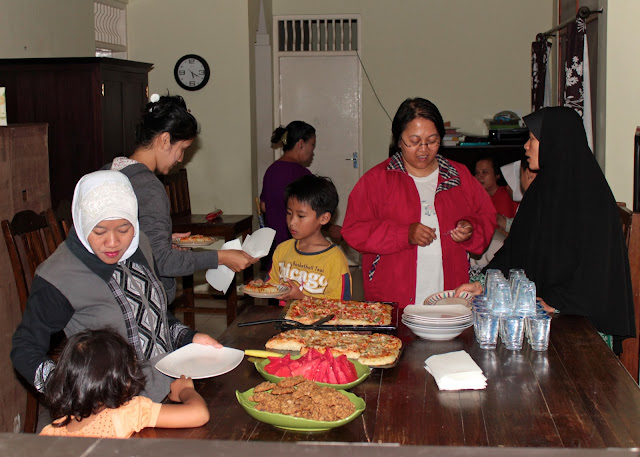 It actually rained a bit here this last week. According to my calculations it was early June the last time it had rained. Of course, 4 months without rain is nothing to write home about in some climates, but for a tropical "rainy" country I didn't really expect dry season to be so dry. But boy, when it gets raining here, it surely rains!

Count down till moving day! Our household has been a flurry of activities of late. All those big and little things that one needs to do to move a family from one Island to another. We will be packing our container on the 17th and hope to be flying to Tarakan on the 18th!!!

Needless to say, our next chance to update y'all from here will probably be after we've arrived, found our tooth brushes, got an internet connection, fed the kids, etc. We won't be moving into our future home right away as it is still being prepped for us (which we are super thankful for!). We'll move into another home on a temporary basis.

In case y'all haven't carefully studied a map of Indonesia lately, here's where we are now "A" (Salatiga, Central Java) and where we're heading "B" (Tarakan, East Kalimantan):

View Larger Map
We will really appreciate all your prayers as we continue to prep for the move, and also safety and sanity as we travel. This is especially true for our children, as they say goodbye to their old home and friends and prepare for their new life - something that can both be exciting and scary at the same time! 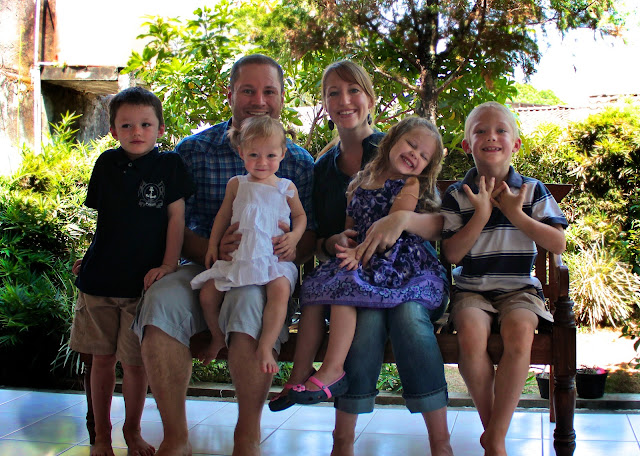 It is amazing how pictures can capture those split second moments when everyone is actually looking in the same direction and sitting remotely close to where you asked them to sit (multiple times). 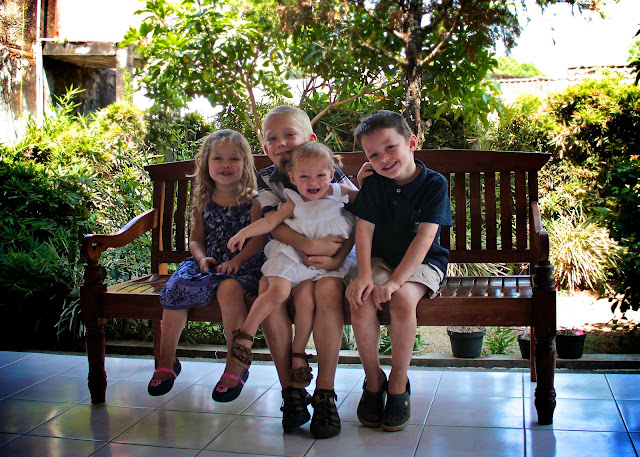 One of the joys of speaking an internationally accepted language (Canadian) and living in a country that does not officially speak the aforementioned language, is all those "lost in translation" moments one often observes in daily life.

The example below is by no means the funniest, most outlandish, or accidentally inappropriate example, but, I thought it at least worth sharing to get the ball rolling for future posts. After all, it's high time I did a little laughing at someone else's failed attempt to communicate half respectably in another language...Not that we know what that is like (well, no one laughs at us to our faces, thank goodness, but that doesn't mean we don't regularly say silly stuff).

I bought a bread knife the other day, and the information on the back seemed to be a weird combo of 1/2 normal sentences and completely messed up sentences. 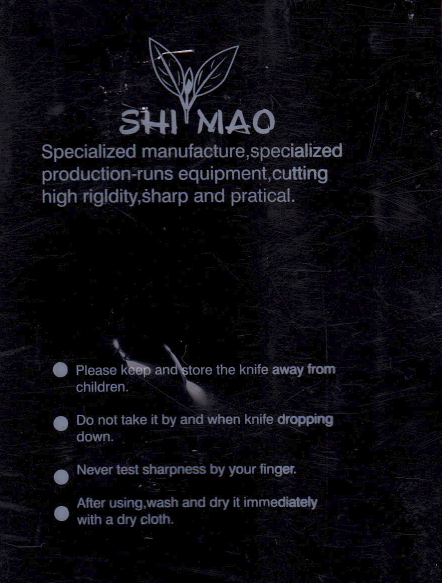 "Please keep and store the knife away from children"
Okay, understandable, straight forward.
"Do not take it by and when knife dropping down."
Don't take it where? When? I guess anytime a knife is 'dropping down' it's not good.

And don't forget, what the customer needs to know about this bread knife apart is:
"Specialized manufacture, specialized production-runs equipment, cutting high-rigidity, sharp and practical."
Posted by Unknown No comments: