This & That Around the Hangar

I've collected these pictures over the last while in and around where I spend most of my time: The hangar!

Along with flying sick or injured people out of the interior, another way we help meet a real (although sobering) need is moving bodies to be buried where they called home. Below, family and friends gather around an airplane for prayer before a body leaves on this flight. 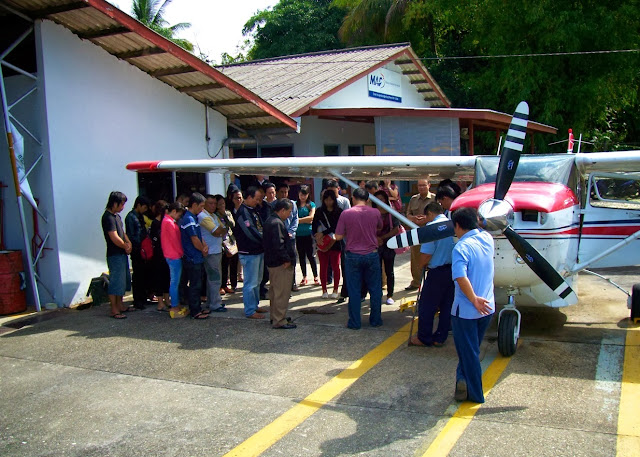 I'd say on an average of once every month or two, a big column of black smoke appears on the horizon towards town, as someone's store, house - or anything flammable - burns down. On this particular day, I found out later that it was a boat in the harbour, and unfortunately a couple people died. Houses are built here close together, using a lot of flammable materials, poor wiring practices, open flames for cooking...the list goes on. The result is lots of fires. 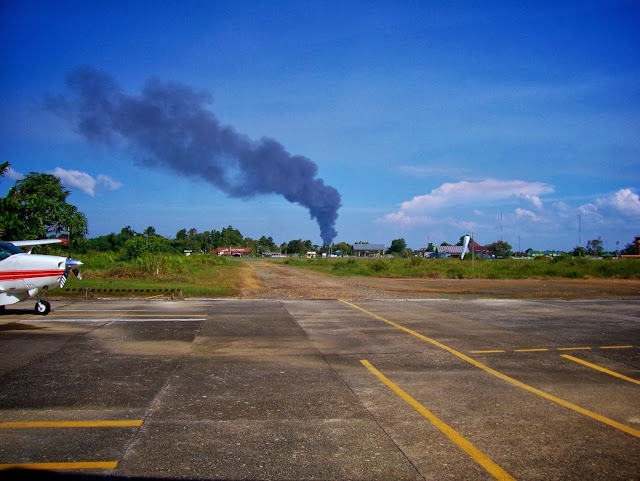 Pak Nelson was nice enough to pose with his newly acquired Biawak (monitor lizard). This one was caught near Luke & Si's school. It later became a delicious source of meat for Nelson's family (I've heard it tastes like chicken, but doesn't everything?) Nelson is from the Krayan Region and knows how to cook up almost anything that can be found out in the jungle. Biawak's are quite common here, even in the suburban areas. I'm happy to not have this one hanging around the kids at school, as a bite from one would not be pretty. 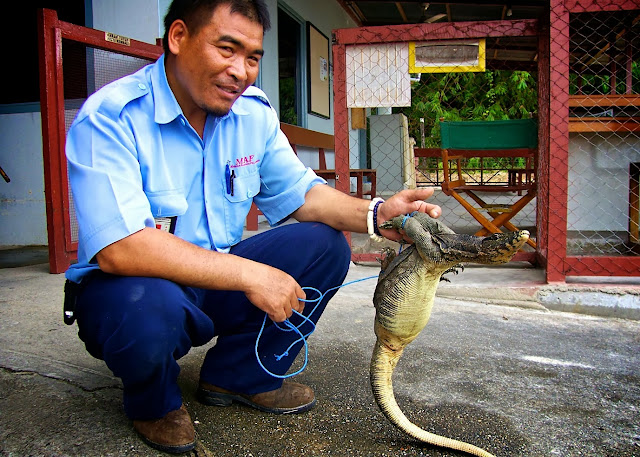 Below, one of our Kodiak's is looking funny sitting there without it's nose landing gear. We took it off for some routine maintenance, and just in case anyone was wondering...No, we didn't leave the plane sitting like seen below; held up with an engine hoist, this was a temporary "situation", as we shuffled nose gear assemblies. 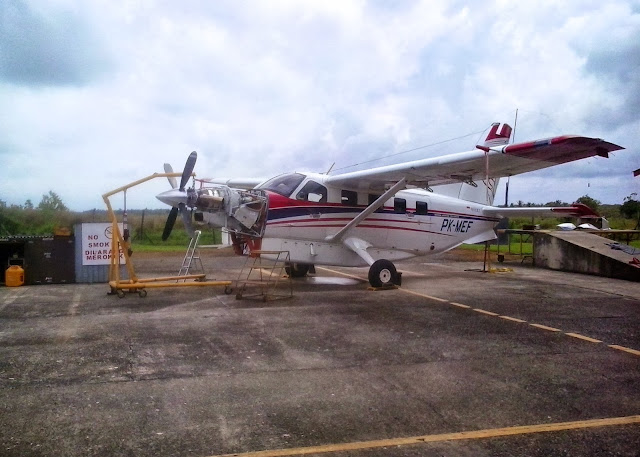 Tim is in the process of re-assembling the nose landing gear strut after we completed an inspection. Man, Tim! You look professional!! 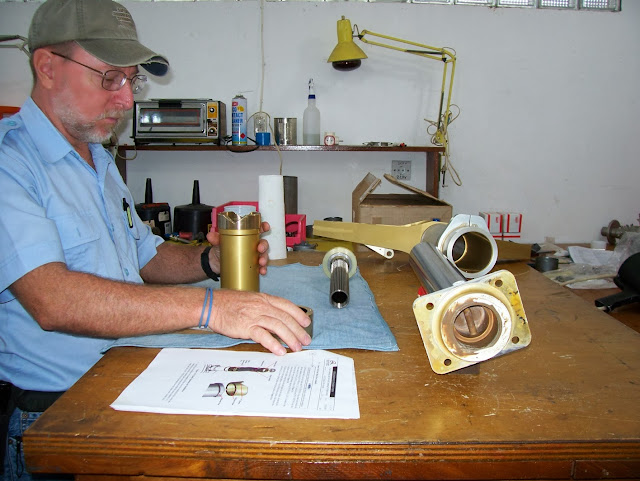 Here, Pak Jonathan is helping with a compressor / engine rinse. A couple times a week we "bath" certain parts inside the engine with de-mineralized water. This prevents deposit buildups from salt and other goodies floating around in the air. Combined with really high temperatures, these deposits can compromise the internal integrity of the engine. I don't think cleanliness makes one more godly, but in this case it certainly makes things safer. 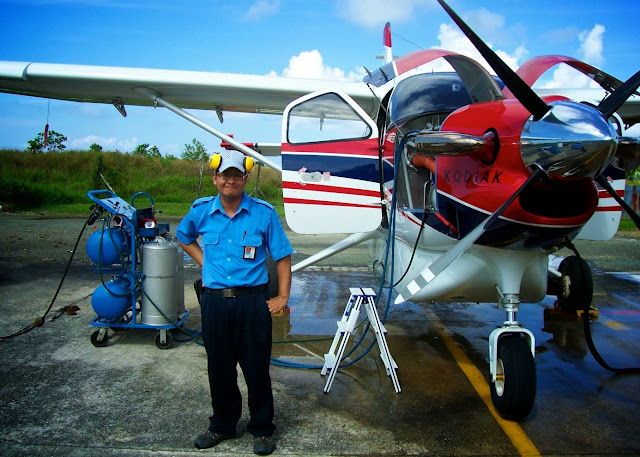 In the last few months we have tackled some larger inspections on a couple of our Cessna 206's. Below, we are beginning to take apart the entire tail of this plane. so that we can inspect all those parts that are hard to get at. 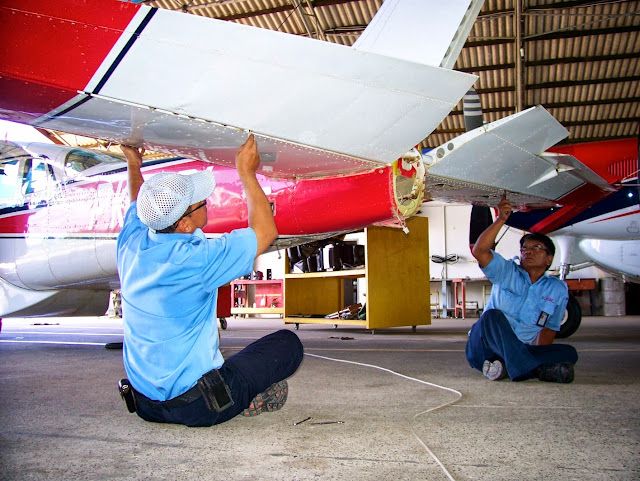 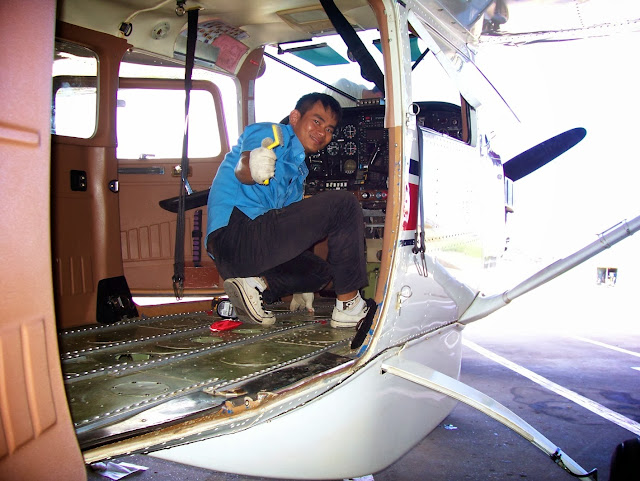 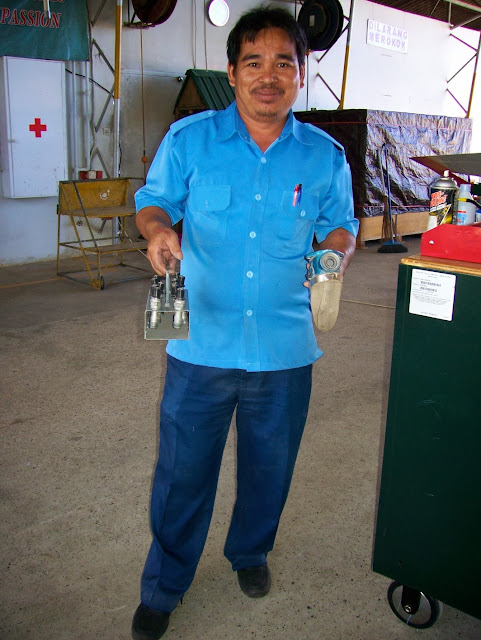 And of course, there's no doubt who is working the hardest...just look how much I'm sweating. Oh wait, I'm always like that. I just need a tuque... 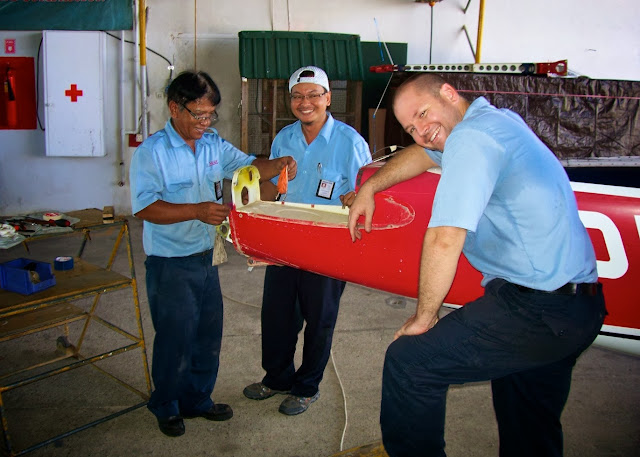