Here are a bunch more pic's of our time in Buduk Kubul... 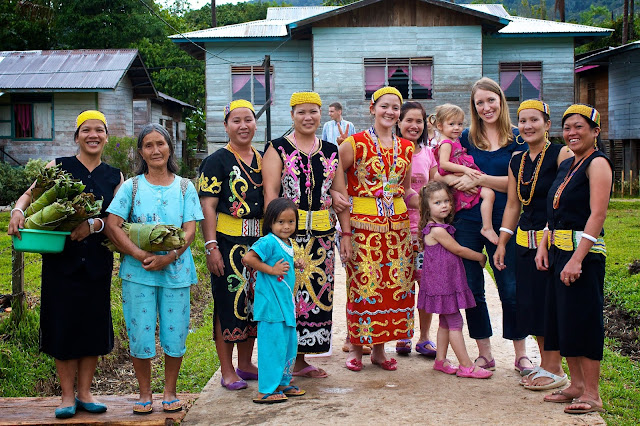 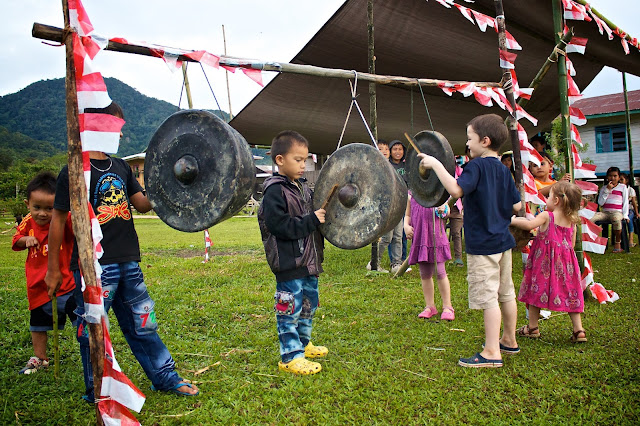 Above Simon tries out the gongs. About 30 seconds later some guys decided it was time to take them down...go figure. 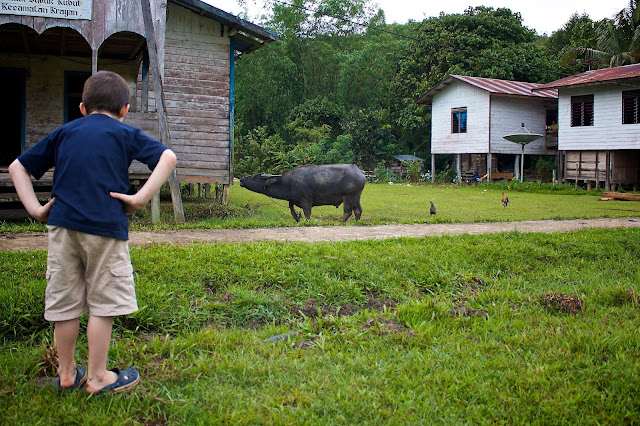 Simon starring down a water buffalo. Notice the wires going from one house to another, this village uses a communal generator in the evenings for power.

Below Luke plays some soccer with some local kids. After just 24 hrs, Luke new the names of 6 different kids, and was really sad to leave on the plane. It was so cool to see him jump right in and just soak up where he was, and make friends so quickly! 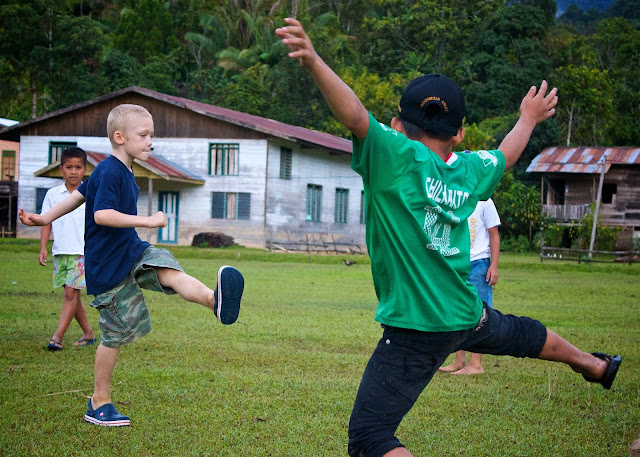 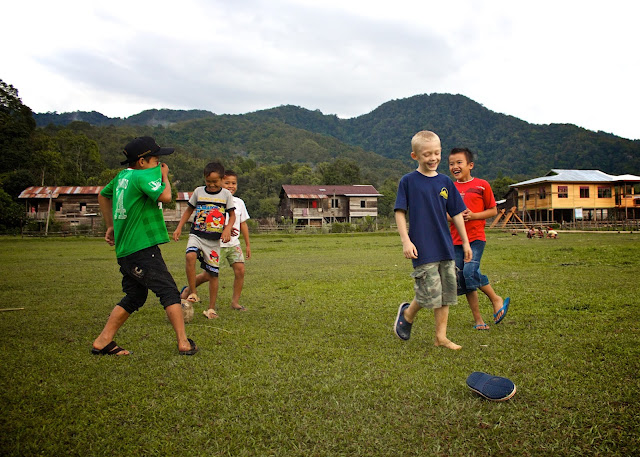 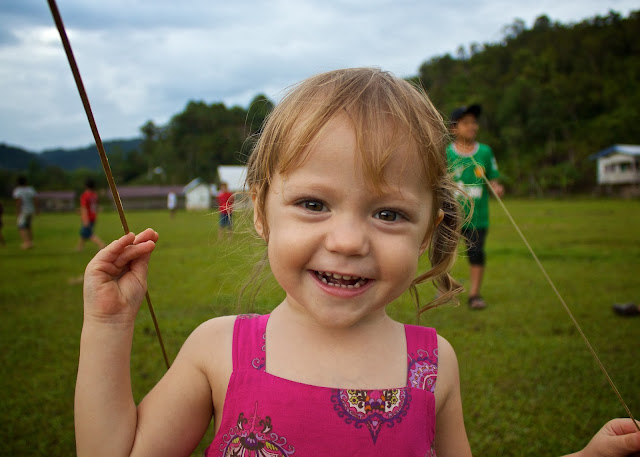 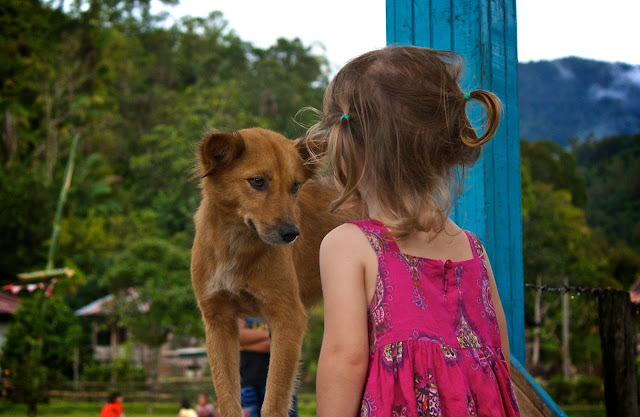 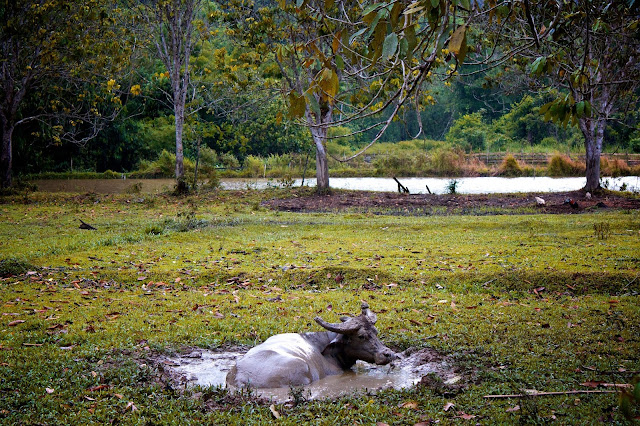 You don't have to walk far out of town to start getting into the rice fields. Above is a water buffalo soaking up a little mud, and maybe hoping his immediate future does not involve providing delicious meat for the festival. 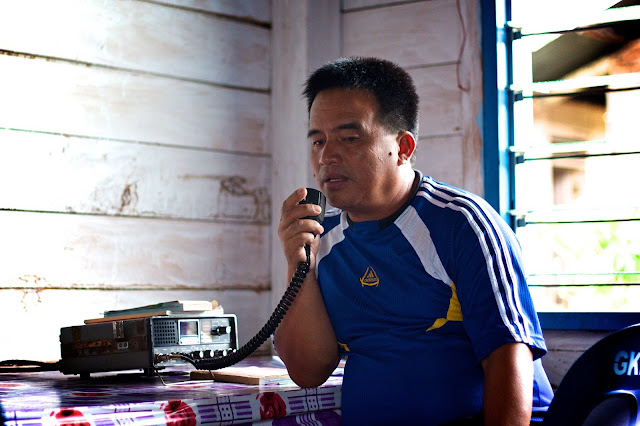 Above, is the pastor of the local church, and also MAF's rep in Buduk Kubul. He helps get passengers & bags weighed and checked, and also gives daily runway & weather reports to the pilots over the HF radio. 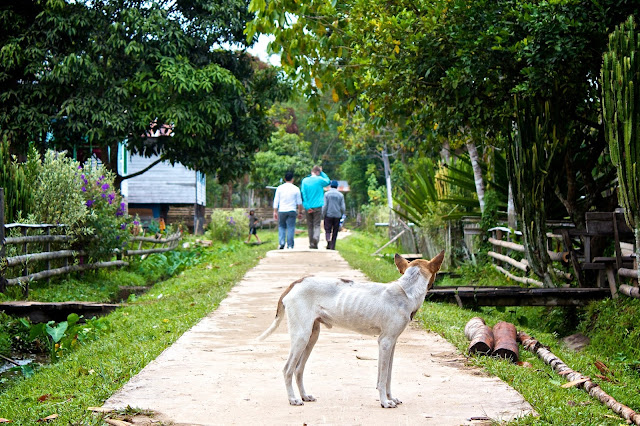 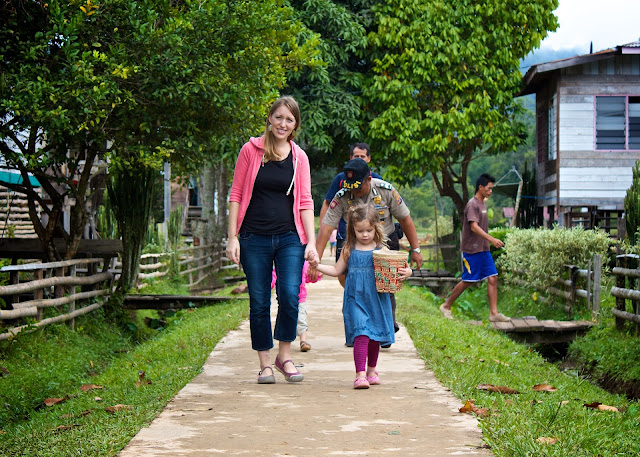 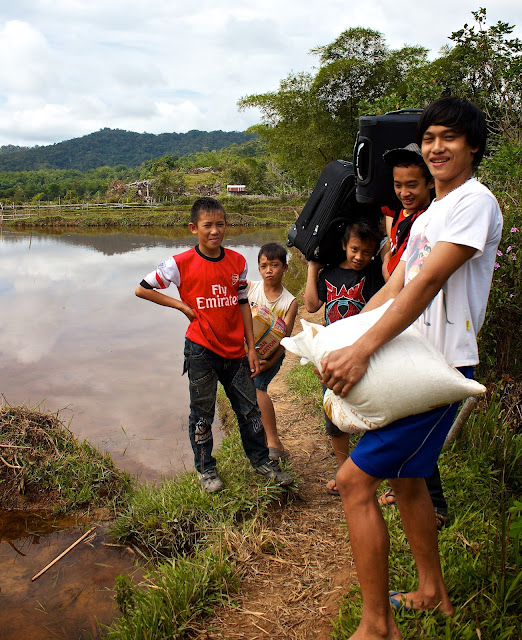 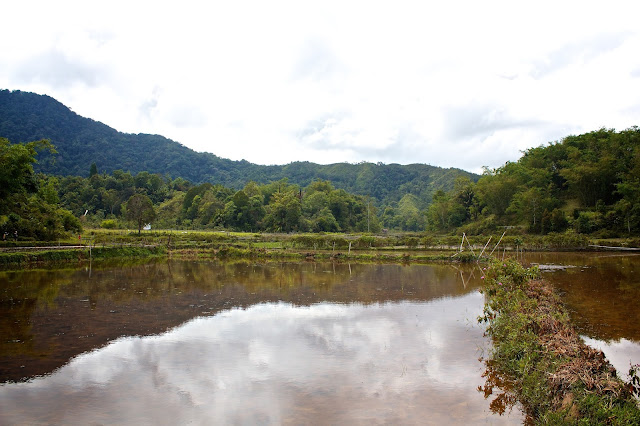 Another nice view of the valley. I was really struck by the lack of garbage here. Often, garbage is an ever-present & unpleasant reality in developing countries. But out here, garbage has a long way to travel to get here. When we left, we were careful to take out whatever we brought in (just like good tree lovin' West Coast Canadians ought to...). 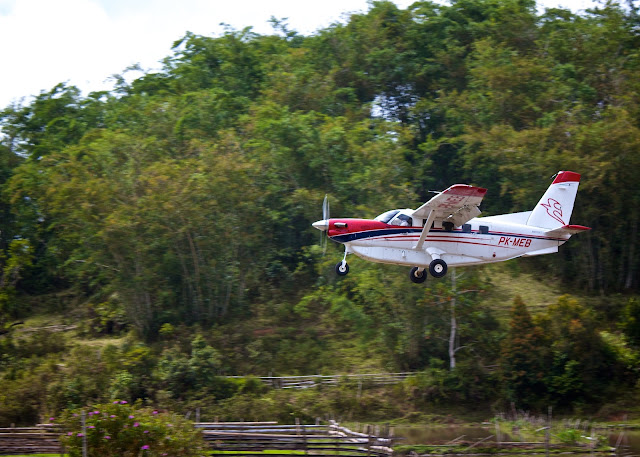 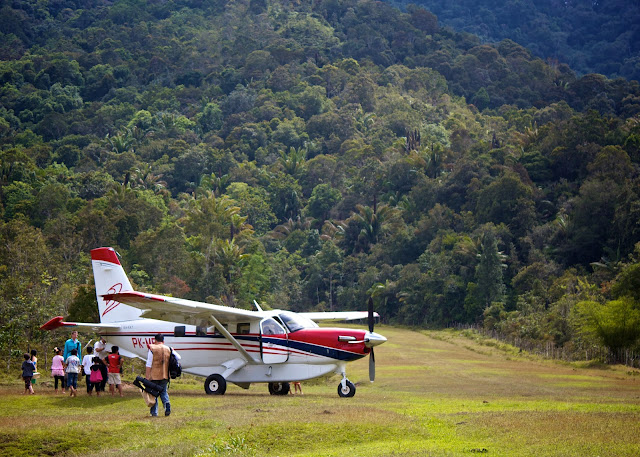 We flew in on a Cessna 206, and it was neat to be able to compare flying out in a Kodiak. Everyone had their own seat, and all our baggage and gifts fit on no problem! On the way in, it was more like sardines in a can and the pilot told everyone to lean forward to get off the ground (just joking). This is the kind of situation you really see the benefits of the Kodiak - being able to land in a spot like Buduk Kubul, yet do a lot more work in one trip! 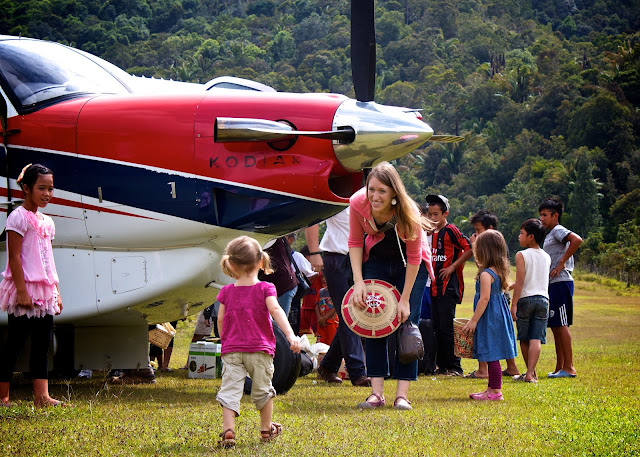 Charlotte running to Mom, and Helena is making sure her new basket makes it on the plane. 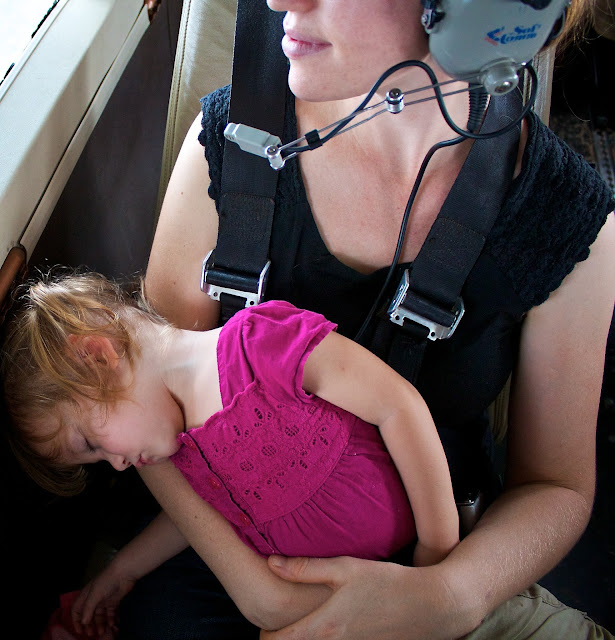 This is Charlotte's favourite way to fly, and we don't mind a bit!

This post is a continuation from our last post: Our families experience staying overnight in the small interior village of Buduk Kubul! But I must mention first, this post is a week late as a result of the internet not co-operating with me, and I lost my entire first version of this post into the never never land of internet 1's and 0's. So, without further delay, here is edition 2...

As soon as we arrived to the home we were staying in, these guys below showed up with a still alive Porky Pig strapped to the back of their bike. Food for the feast! 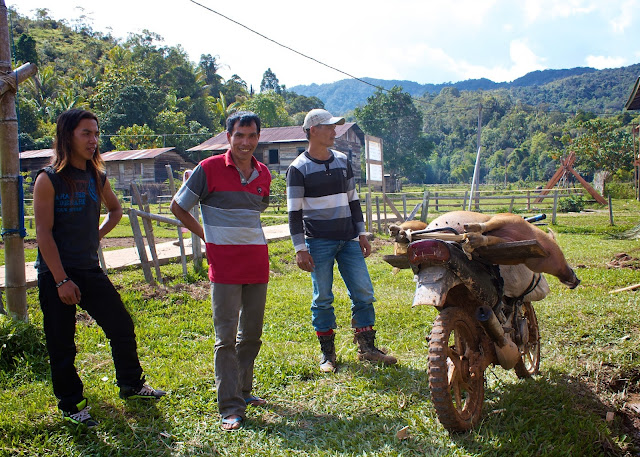 Not more than an hour later, we went over to the village meeting house where Porky Pig was already being prepped for eating. Poor Luke, as soon as he saw the pig, he thought about a nice delicious side of ham, and kept saying, "YUM! It's been so long since I've had ham, I love ham!!"

No, "ham" is not pictured below, but rather 2 plus inches of delicious fat, which just happens to be the prize part of a pig in these parts. Although not my personal favourite (as I used to drive my Mom crazy by pulling every little piece of fat off of any meat I was served), it was so neat to be invited into their homes and places of meeting, and share in the festivities. We met nothing but kind people during our short time here. 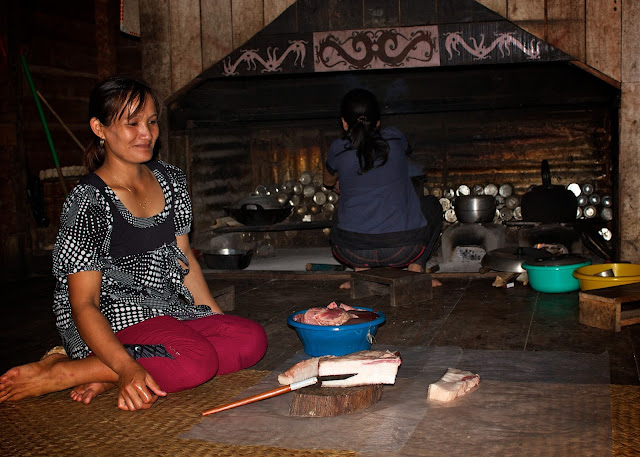 Below is one of many "pre-meal" spreads we were fed. It is important in a situation like this to not stuff your face the first opportunity you get, because the next meal 20min.'s later will come and you'll be in hurtin'. We were treated like honoured guests, and it is humbling to have people who don't have that much give so generously. 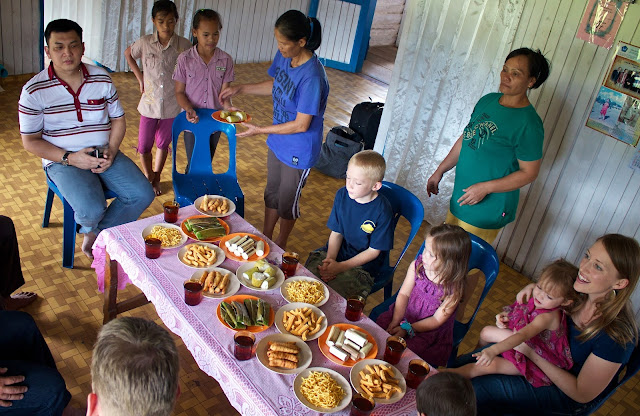 Below, Luke is peering out the window at a pretty heavy afternoon down pour. It is neat to think of all these items that have been brought in by air to this location over the years...maybe even this window! 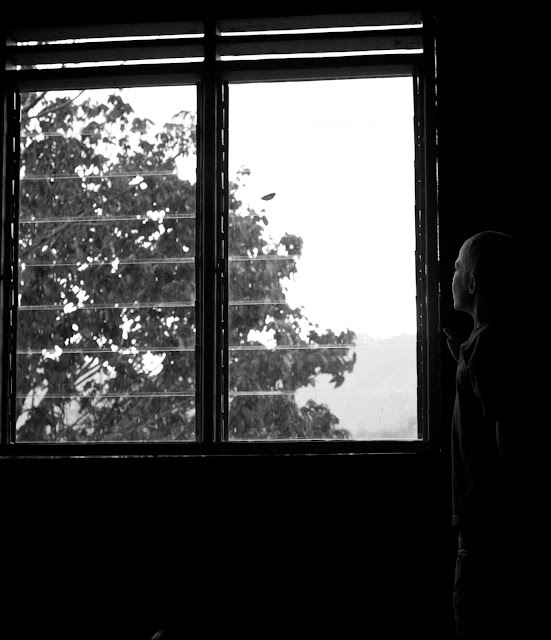 Below, cooking over an open fire...how cozy and quaint! Actually, it is the way they role here. Most cooking in Indonesia is done via liquid propane gas, "LPG" (that's what we use in Tarakan, you pay to get bottles filled which are kind of like big BBQ propane bottles). Unless of course you are too poor to afford LPG, or just can't get your hands on it. We knew families in Central Java in language school (which is a much more central location in Indonesia with roads and large populations) who cooked over a open fire on a dirt floor. Here in the interior of Borneo, even if they could afford it , they can't get it. So, this is how they do all their cooking! 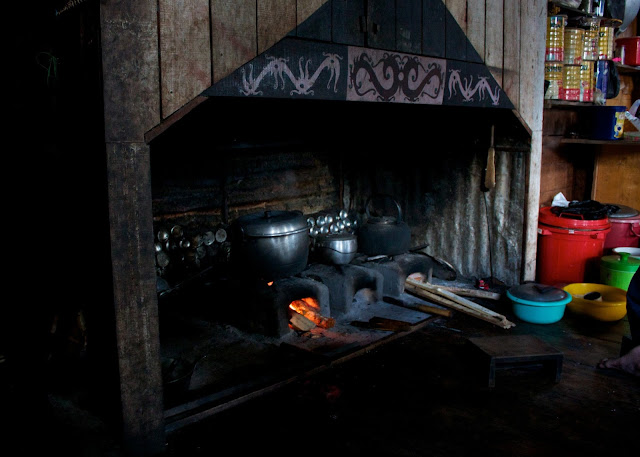 Amy and the kids hanging out with the women as they prep some more of Porky Pig's insides :) I must add, a lot of the food served to us was quite tasty. 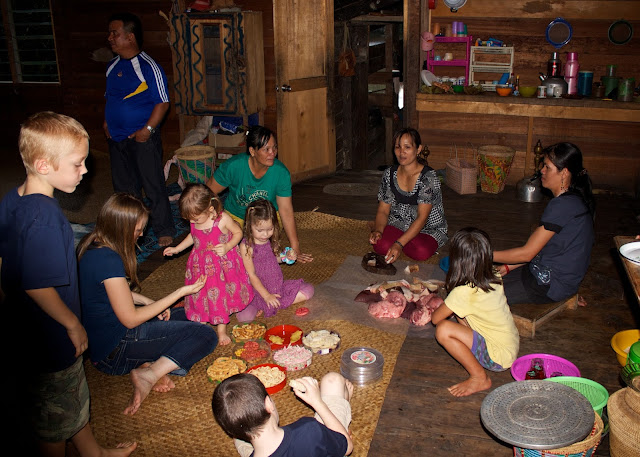 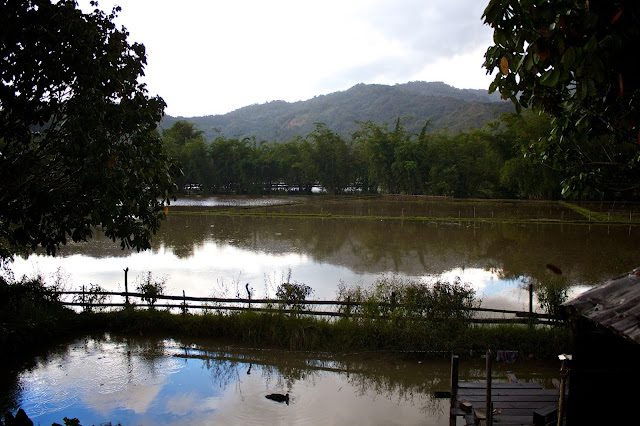 Above is some of the rice paddies in the valley surrounding the village. Below, Wilburt and Mersi chit chat in the meeting house. 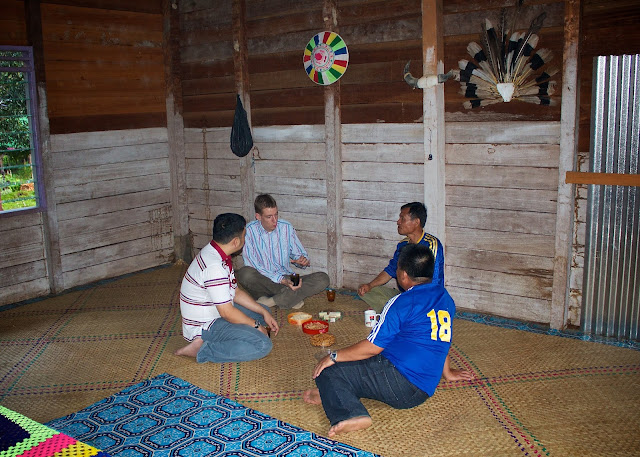 Below, Amy and the girls chatting with some women in their traditional attire. Because we landed late and missed some of the earlier festivities, these ladies got dressed up later in the evening and redid their full presentation for us. Unfortunately, I personally missed it as it was in the wee hours of the morning and I had taken Helena to bed. 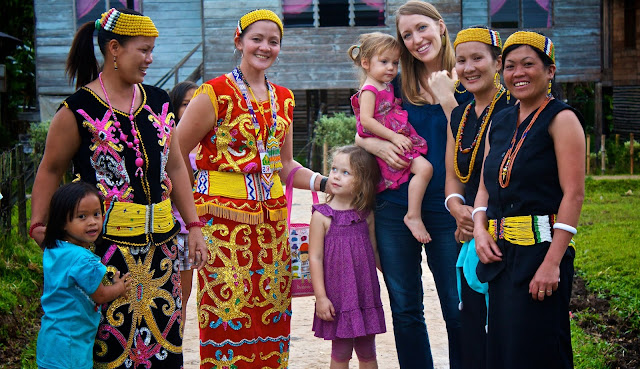