My Grandfather, Our family

When I was young, very young, my family would make the summer trek from the mountains of BC to the open prairies of Alberta to visit my Grandma and Grandpa. To me, it was heaven. The wide open expanses, the smells, the animals, the big machinery; so much of it was new, different and exciting.

My Grandpa was larger than life. His big hands could wrap just about all the way around my torso, his face was like sand paper. He was an imposing figure, but to me he was always gentle.

We were the two early birds. If I got up when I heard Grandpa and ventured down the steep farmhouse stairs, I'd be rewarded with a cup of coffee with two heaping spoonfuls of honey. Mom wouldn't approve, but she was still sleeping at that time, hoping her Dad would let her sleep a little more. When Grandpa wasn't working, that meant a possible ride in his yellow tractor or maybe an evening ride on the hay cart. I remember once we ate a whole bag of Grandma's cookies together while riding the combine. In the evening, sometimes he'd tell us grandkids all about how he once was a soldier in a war long ago and we'd look at old black and white photos and medals he obtained from the distant past.

As an adult, I ended up living relatively closer to my grand parents as they had moved, and so had I. For a few years our visits were more frequent and our conversations went for hours. My intrigue with history had caused me to become more and more interested in my own Grandfather's experience. 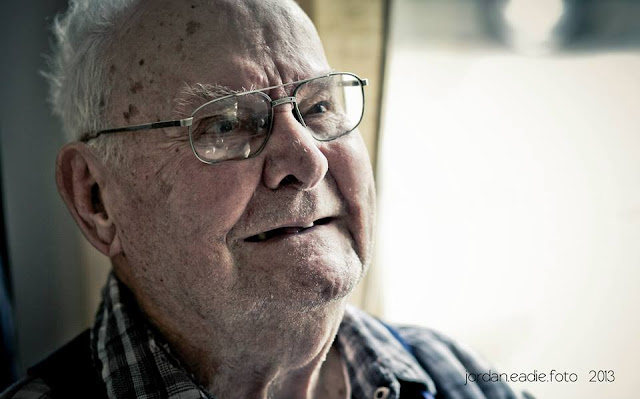 My Grandpa would talk slow, and we'd drink coffee, and I loved it.

I've heard that in the twilight of a person's life they sometimes will open up more about the hardest and most impacting experiences they've lived (my Dad said the same about his Dad who died when I was only 10). I'd ask Grandpa questions about specific historical events, and he'd give me real life experiences right off the pages of history.

I learned of General George S. Patton in a history book. Grandpa told me of a two minute conversation he had with the General as his motorcade passed a small bridge Grandpa was helping guard in Sicily.

I watched the Band of Brothers episode "Carentan".  Grandpa told what it was like to land on the beaches of Normandy, and role straight on to a town called Carentan to rescue an entrapped airborne division behind enemy lines.

He showed me his marked and swollen legs, and told of how they froze during the battle of the bulge. He shared stories of the horrors of war beyond what I could fathom, and that still brought him to tears. He was there, he lived it. And by God's grace he survived. 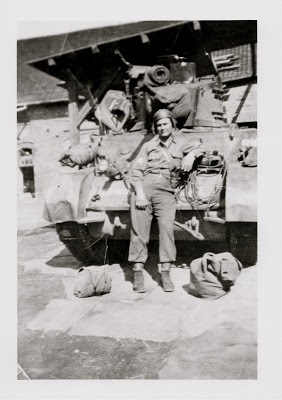 He told me stories of growing up in Florida, his Dad growing tobacco crops, eloping with a girl he met in New York City after the war, even buying an old truck from the University of Florida to move his ever growing family to the opposite side of the continent.

Grandpa was physically strong and an independent spirit. When he was a younger man, I imagine he remedied most challenges in life with hard work, bravery, and brute force. He'd will himself forward, obstacles were meant to be overcome, not avoided. As an old man, his conversation would often move to the things of God; what book he was reading, what God is teaching him, what Christ meant to him. I could see it was a challenge for him to have his once capable body slowly ebb away, it's limits becoming greater and greater.  It is hard for us all. Our tendency is for our strength to be in ourselves,  even though we eventually falter.

But we are poor and needy, each and every one of us, whether we admit it or not.

"Blessed are the poor in spirit, for theirs is the kingdom of heaven"

As my family has newly arrived back in Indonesia, it pains me more than I expected to be physically separated from my family during this time. Grandpa passed on a couple days ago at age 96, and the family will get together to both mourn his passing and celebrate his life. For years I have known that being overseas means that when a grandparent, friend, or extended family member dies we probably won't be there. Logistics and cost of travel separates. I've savoured each visit I've had with Grandpa & Grandma over the last few years knowing this, and this last fall I felt in my heart it was the last time I'd see Grandpa. This will be the 3rd family funeral Amy and I will have missed.

But I've realized that the story of why I am where I am can be followed back through the generations. God's story in my life is much bigger than myself. Grandparents are the living patriarchs of families, and in our case it stretched four living generations (and still does with Grandma).

Our family is full of sinners, each and every last one of us. There are skeletons in the closet, dirt swept under the rug, and disfunction that has been past down from one generation to the next.  But this is true in one extent or the other with every family.

"...Those who are well have no need of a physician, but those who are sick. I came not to call the righteous, but sinners."

God has been merciful to us.

There is an evident story over the generations of the Barden family that bares the fingerprints of Christ. We have seen healing, we have seen destructive patterns broken, we have been examples of what Christ does: He redeems the lost, and clothes the sinner in righteousness. We've seen a lot of pain as well, but His work of grace and mercy continues in us; an offer to move from spiritual death to spiritual life, a free gift of forgiveness.

There is nothing any single ancestor or descendant of Grandpa did that warranted God looking upon our family and saying, "These people are worthy of me helping them out."  Rather, while we were all sinners God chose to intervene, because He chose to love us...It was His call, His choice. He is faithful, even though we are incapable of being so ourselves.

And so by God's grace I grew up in a family with a Mom & Dad that attempted to balance life on the foundation of Christ, a foundation that is solid and does not disappoint. And by God's grace - and His grace alone - the Gospel of of Christ became real to me when I was young, and has grown into something that I strive and desire to build my life around:

A Truth that is life like fresh spring water is to a big old tree that has grown deep roots and a strong gnarled trunk. And even though wind and storms come and bend the branches, the trunk stands firm and unmoved because the roots run deep, and the fresh living water is soaked up giving life to the tree.

The word of God is Truth.

I'm discovering this Truth more and more as the grace of God works in my life, uprooting bad habits, and overcoming my sin - things I just can't do by myself.  I haven't yet lived the years Grandpa did, but my life is evidence that the Gospel is Truth; I have been blessed where I do not deserve, and though I am needy and destined to failure, Christ is my victory. The older I get, the more I realize this, and the more thankful I am.

I'm a needy person, blessed are the poor in spirit.

And so God led our family to live in Indonesia, and at this time it hurts to be far away. I'll miss my Grandpa and miss the opportunity attend the funeral and be with all of my family I love. But I have this bottomless well of Joy:  I know Jesus Christ.  I saw Christ in Grandpa; He was evident in the old man I knew. And, I know what Christ is doing in our family, and He is faithful to finish what He started.

"When the poor and needy seek water, and there is none, and their tongue is parched with thirst, I the Lord will answer them; I the God of Israel will not forsake them."


Posted by Unknown No comments: