A Steadfast Love - My Grandmother

Grandma was anything but intimidating, I think she would brake 5 ft with heels on, not that I ever remember her wearing heels. Her personality was soft and sweet, subtle yet witty; a contrast to big, strong, slow speaking Grandpa.

My earliest memories of my grandmother were in her farmhouse in the kitchen with something like a pale of fresh milk, or maybe yelling up the steep farmhouse stairs for one of her youngest kids to get out of bed. Or more vividly, I can imagine her sitting at the kitchen table notepad and pen in hand, dwarfed by the giant stack of coupons, magazines, and newspapers covering a good portion of the table.

And did I mention collectibles? Grandma loved collecting stuff, and I do not require a a DNA test to confirm my ancestry.

Where Grandpa was a little hard of hearing, Grandma heard everything. Where Grandpa was forgetful, Grandma would remember. She would instantly recall and fill in the blanks in Grandpa's conversations, maybe with a subtle roll of the eyes that Grandpa wouldn't see. She could tell you what specific items were on sale two weeks ago, and how much she saved with her stack of coupons. No contest went un-entered, no coupon went unused.

And of course there are the stories I heard of her killing snakes in Florida, and shooting pesky magpies out of the air on the farm. When I was young I loved stories of brave "little" Grandma.

Grandma and Grandpa met in the Chrysler building in New York City. Grandpa was fresh back from the War working as a Bell-Boy, and Grandma was the cute secretary. For small town Canadians, this was the stuff of movies. 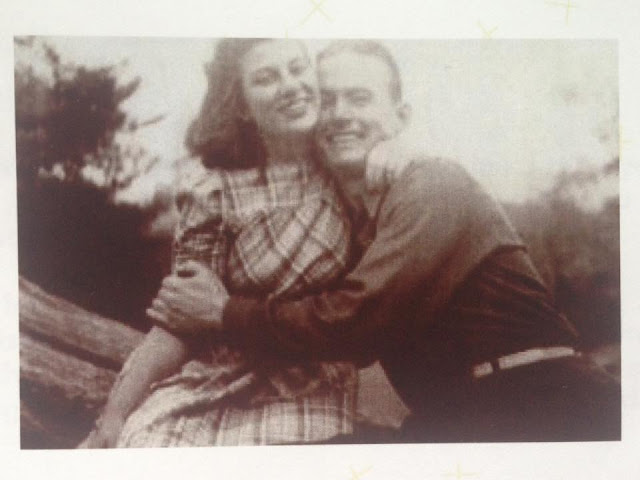 The southern boy and the city girl fell in love, and after six weeks of dating and they eloped. Their wedding photos were a few quick pictures in Central park. Nowadays, there probably would have been selfies.

In what probably seemed like an instant for her parents, she was gone, moved away with some hick soldier boy to another world; to rural Florida.

I can relate to my Grandmother in what it is like to move into a new culture, to adjust over time to not just the major differences, but also to the countless unexpected subtleties that almost weigh heavier long term. And to go through it alone, newly married. Florida is what Grandpa new, it was his family. For Grandma it must have been new, strange, and completely overwhelming at times.

Being the eldest, my Mother was not yet 13 when she and her siblings left on their "adventure" across the lower 48, leaving Florida for Alaska. This journey came to an end on a plot of forest 10 miles from the small logging town of Houston, in northern BC.

The homestead life began, and at least this time Grandma and Grandpa were both foreigners in a new place.  From sunny Florida to snow blowing through the cracks in the log house. From snakes on the front porch to eating moose meat all winter. No electricity, no running water.

In the last few years I've become familiar with the term "third culture kid". This is a concept that is used to describe what is like for kids to move and grow up in another culture foreign to them. Kids become accustomed - but not completely part of - more than one culture. The result is a "third culture kid", and for my family this relates to us raising our kids in Indonesia. My kids are now familiar with life in Indonesia, but they're not Indonesian; they are Canadian. But in Canada, my kids do not completely relate to kids their age, their experience is different.

I imagine my Mother and her siblings can relate very much to this; whether it was Florida to Northern BC, or transitioning from the homestead lifestyle to "normal" life in Canada.

This small, sweet woman from New York City lived it all, and along the way she bore 14 children. 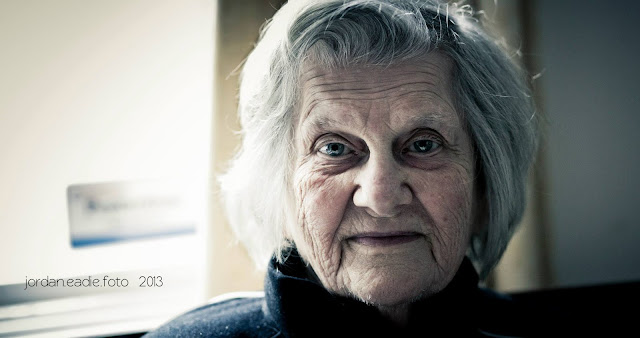 A few years ago, I remember visiting Grandma and Grandpa at their small one acre plot a 1/2 hour drive from town. Maybe they were too old to be living so far out of town, but it must have been familiar and comfortable, it was what they knew. Grandma's memory had begun to deteriorate years previous, and as I sat and visited with them I new she was struggling to know who I was. After a bit of time she suddenly realized I was family, and I could tell she was embarrassed, like an old hockey pro falling on the ice in front of his grand kids. Grandpa was physically strong, but Grandma's strength was her mind.

She sat there pen and paper in hand struggling to recall all of her kids names, and as she recalled them she neatly wrote them down and told me there names, almost with relief that she could still do it. Just as my Grandpa's strength slipped away, so did my Grandma's mind.

This year would have been 70 years of marriage for Grandma and Grandpa. For a marriage to survive all that they did is a quality mostly reserved for passed generations, it is "old school". I see Christ in her enduring faithfulness and commitment; her soft subtle approach that could somehow engulf and absorb whatever came her way.  They endured a lot, and yet stayed together.

"Let us hold fast the confession of our hope without wavering, for he who promised is faithful"

She chose to remain to be committed, she chose to love her husband until death, just as Jesus Christ chose to love her. Christ's love for her was/is not based on Grandma's performance during her life, but rather is it based on God's own love. God chooses to love us and by grace cover us in His forgiveness, it has nothing to do with us. God is faithful, and we are the recipients of this faithfulness.

And this choice to be faithful is what Grandma and Grandpa had, and somehow through 70 years of trials, joy, dysfunction, good times, challenges, maybe even nightmare-ish experiences, and most recently deteriorating health, we see a picture of a husband and wife with a love far beyond feelings and 'holding up each others end of the bargain'. It was a love that tapped into something beyond their own sinful selves, something much more solid and unchanging: the steadfast love of Jesus Christ.

"Your steadfast love, O Lord, extends to the heavens, your faithfulness to the clouds."

And just 49 days after her husband died, Grandma left this world too, to be together with Grandpa as adopted children in the Kingdom of God.