Fun with Planes! (The Quest Kodiak)

WARNING: If airplanes bore you, you might just want to scroll down to the very last picture...it's not of an airplane :)

I (Ben) am down in lovely Spokane, WA taking a some more aircraft maintenance courses at Spokane Turbine Centre. Amy and the kiddies are on the Sunshine coast spending time with family (I miss you guys!). Yes, I did take a course earlier this year in Wichita, but that course was focused on a different aircraft - the Cessna Caravan. The courses I am taking here at STC are geared towards the Quest Kodiak (both planes are utilized by MAF in Indonesia). Let me show you pictorially the vast differences between the Kodiak and the Caravan: 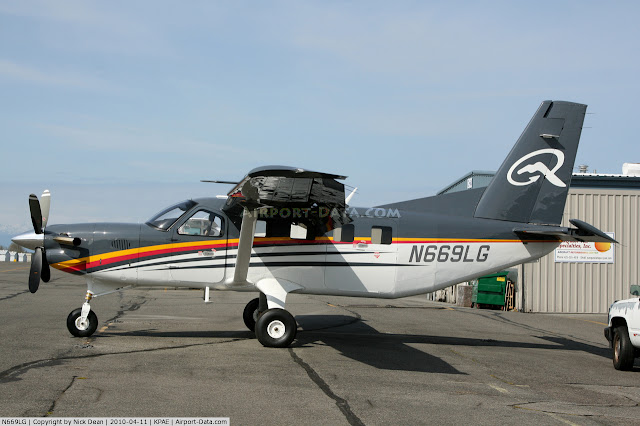 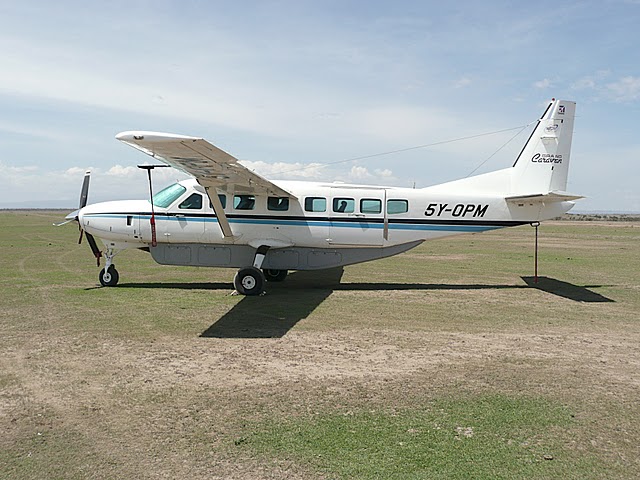 Cessna Grand Caravan  'Grand' meaning a stretch version compared to a regular Caravan. It has extra trunk space like the Dodge Grand Caravan, but when you're flying over tree tops, thankfully it's a little more reliable than a Dodge!
Yes, at first glance they look almost the same.  Maybe the most noticeable difference in these two pic's is the cargo pod on the belly of the Caravan. But soon, most Kodiak's will also have their own cargo pods as they have just been approved by the FAA and are being installed in basically all new planes rolling out of the factory, and retrofitted to most of the ones out there already flying. It makes the plane much more useful (not to mention more front heavy which is a biggie with the Kodiak).


Now, you might wonder what the point is of operating two different aircraft that almost look identical? So glad you asked! As the Caravan has been around for about 25 yrs now, MAF has been utilizing it for quite some time, and it has proven its usefulness. Both the Caravan and the Kodiak have a turboprop PT6A engine, which is a jet fuel burning turbine engine (the same technology and fuel used by commercial jetliners).


Piston type aircraft burn a leaded gasoline called AVGAS, and in recent years this fuel has become extremely expensive, or just down right non-existent in a lot of developing countries. This has proven to be a large issue for MAF since the large portion of their fleet has been traditionally piston type aircraft like the Cessna 206. Not being able to fly because of weather or political situation is one thing, but missing out on helping when you're needed just because there's no fuel isn't cool. 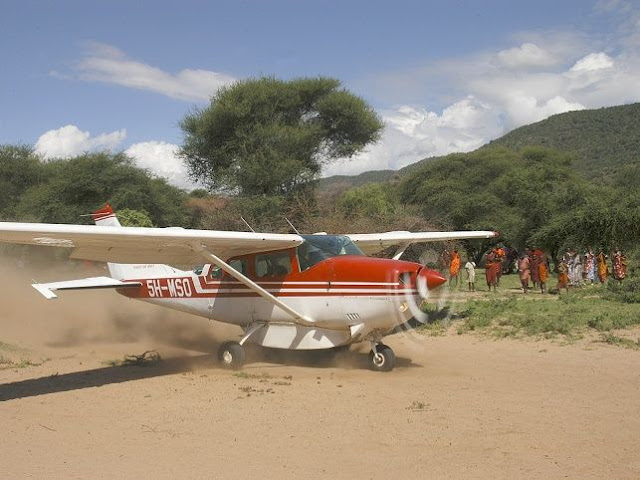 MAF Cessna 206, the traditional workhorse of MAF. Due to high fuel prices, it is becoming (or will become) an endangered species in the MAF fleet.
Problem: A Cessna Caravan cannot fly into a lot of the places a Cessna 206 can. Another issue is that the different "bush plane" aircraft types that traditionally flew into hard-to-get-to places with short runways (like Beavers, Otters, Helio Couriers, etc.) are quite old. Some of them have been out of production for 20 - 30 years.


This is the main reason for the Quest Kodiak. Quest Aircraft wanted to develop a single engine aircraft that was jet fuel burning, economic, hardy, useful (like a pickup truck), modern, and had STOL (short take off & landing) capabilities. And the ultimate goal was to produce an aircraft well suited for missions and humanitarian work.


On Canada day I was able to drive over to Sandpoint Idaho where Quest Aircraft produces the Kodiak and get a tour of the production line. To say the least, it was very neat to see! 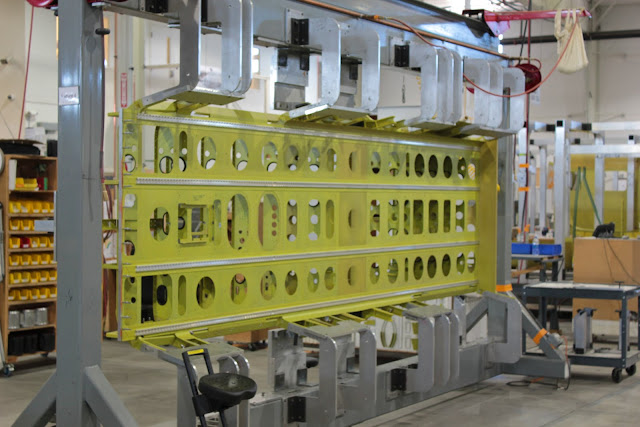 Early on in the production process, this is the floor of the fuselage. You can see the seat rails where the passenger seats will be mounted. Almost all the sheet metal parts (all painted green with aluminum primer) are produced right in the plant. Along with that, basically all machined aluminum alloy parts are also produced on sight using giant computer controlled milling machines, they were about half the size of my house. Some larger aircraft companies sub-contract out a lot of parts & sub assemblies to be made somewhere other than the main assembly plant, so it was neat to see how much is made on sight at Quest. 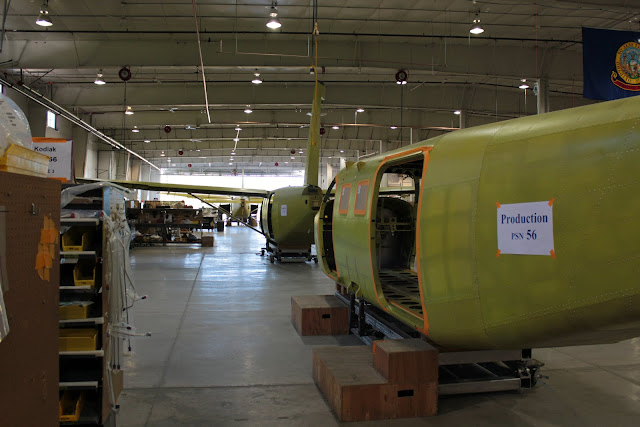 Looking down the line, this aircraft is serial number 56. A couple of planes on this line are future MAF aircraft, and I think one of them is headed to Indonesia...maybe this one! 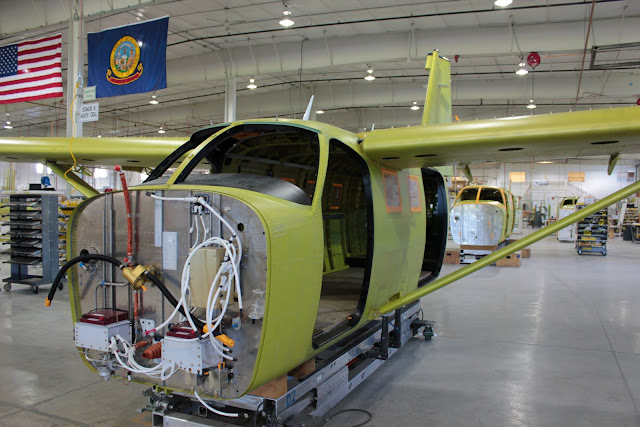 Wings on, and starting to resemble an airplane! Now it needs an engine and some landing gear, and maybe a few other things :)  What do they say...measure twice, cut once? 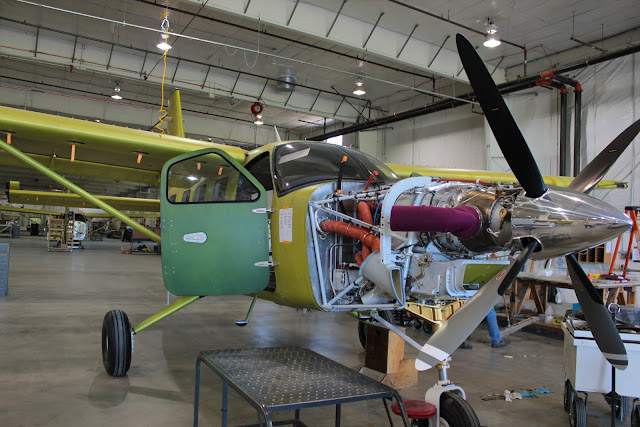 This is a Pratt & Witney PT6A turbo-prop engine, a Canadian product! This particular one used in the Kodiak is rated to put out 750 shaft horsepower on take off. A really rough guess is that a brand new engine like this costs around $400,000 to $600,000 (depending whether or not you get dinged with the HST tax in BC). Notice the four bladed propeller, four blades instead of three allows for shorter blades, meaning the blades are farther off the ground and as a result (good for the mechanic) less damage to the prop from rocks and such. There are a lot of little 'off road' considerations like this in the Kodiak. 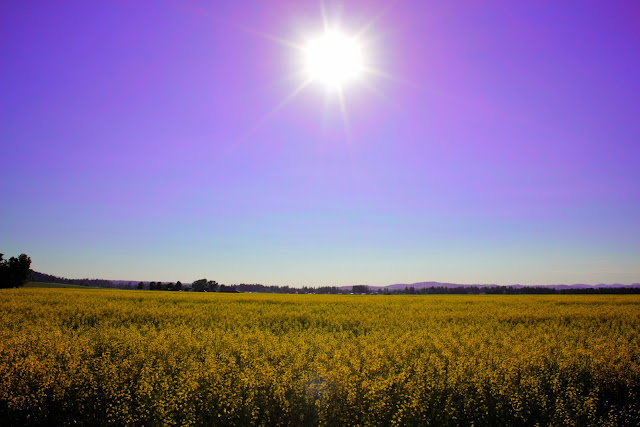 Driving back to Spokane...I thought Amy would like this picture. We both grew fond of Canola fields while living in Dawson Creek, BC.
Posted by Unknown