This past week Amy and I found out that the Indonesian province we are heading to is Papua! For us, this is pretty exciting news in that it allows us to plan and prepare a little better for the place we will soon call home.

Recap...
Last August is when our family found out we would be heading to Indonesia to serve.  MAF operates in three different provinces of Indonesia that are all quite different from each other - both in the people and in geography. So, in the last number of months Amy and I have often found ourselves thinking, praying, & researching about what Indonesian province we might end up in. Both of us have felt drawn towards Papua. But, not knowing if Papua would be where we would end up, we did not want ourselves to get "too attached", as we ultimately wanted to go where God wants to use us, as MAF has much needed & effective ministries in the other two Indonesian provinces of Sumatra and Kalimantan. We also new it would be exciting no matter where in the world we ended up!

"Why does it take as long as it does to find out what specific province you're heading to?"
The reason is, we will not be heading to Indonesia until early November, and our first nine months in Indonesia will be spent in language school on the Island of Java. Often the needs of a specific MAF base in the different provinces can change quickly. As a result, the location most suitable for a pilot or mechanic could end up changing. Thus, MAF likes to wait until later in the process to reduce the chance of this happening.

"Papua...is that Papua New Guinea?"
No, the Island of New Guinea is basically split down the middle. On the right side is the country of Papua New Guinea. On the left side are the two most eastern provinces of Indonesia - Papua, & West Papua (together formally known as Irian Jaya). 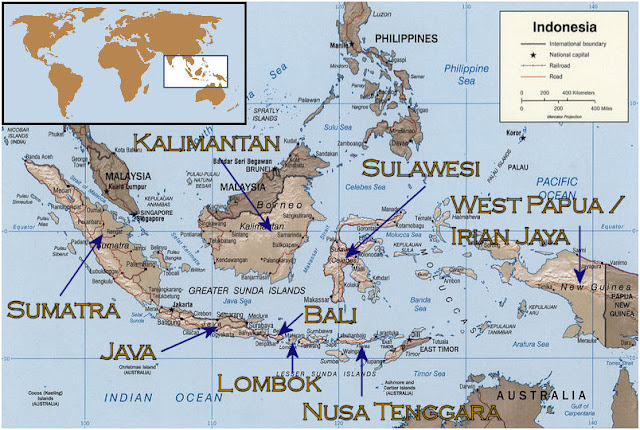 New Guinea is the second largest island in the world behind Greenland, which is just over 25 times the size of Vancouver Island. Stretching about 1600 km's, it has both vast rain forest lowlands and a long central mountain range boasting the highest peaks between the Himalayas & Andes.

The People...
Although Papua's population is growing quickly due to high birth rates & immigration from other Indonesian provinces, it has only 2.9 million of Indonesia's 237 million residents. The people of Papua are very diverse. 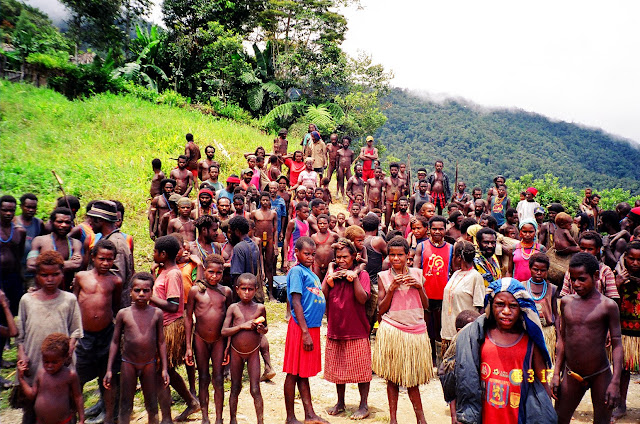 Due in large part to the geography, there are around 274 separate people groups in Papua separated by language. Although some groups have a fair amount in common with their neighbours, some neighbouring languages actually have less in common with each other as English does to Indonesian! 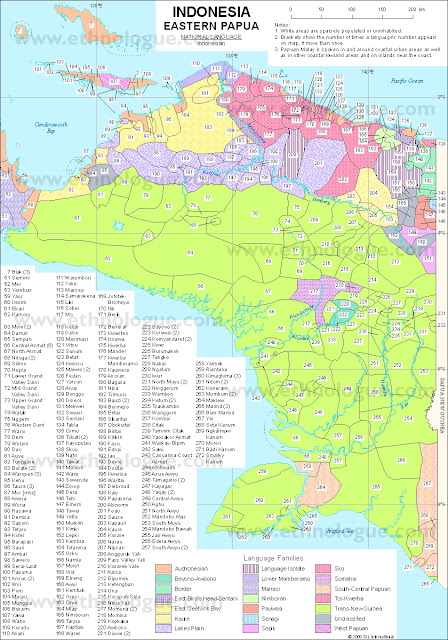 I found this map (above) which gives a great 'visual' of the 274 different language groups in Papua (map not including West Papua). In recent years there has been an influx of population growth in the coastal areas due to immigration (encouraged by the government) from other heavily populated Indonesian Islands such as Java. This has brought about some issues between the immigrants and the indigenous Papuans.

Poverty...
As Indonesia's poorest province, about 40% of Papuans live below the 'Indonesian poverty line'. Due to large distances and a huge lack of infrastructure, isolation plays a big part in the resulting poor education and healthcare for Papuans. Unfortunately, another growing issue in Papua is HIV / AIDS. The number of AIDS cases in Papua is almost 20 times the national average, and has become nothing short of an epidemic in some communities. 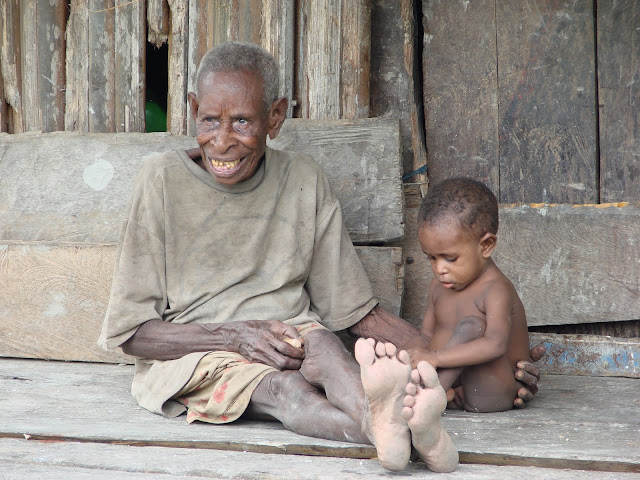 Papua has many needs, but it is both exciting to read how God has worked in New Guinea in the past, and also to hear & see how He is working in the lives of Papuans now! It is also exciting how an organization like MAF can be used in such a place. For the majority of Papuans (outside the few small cities), there are no roads - just jungle, swamps, raging rivers, and mountains. In my next post I'll try tell a bit of how God is using MAF in Papua!
Posted by Unknown