My Honda CB - 3 Years of Learning

When our family was in language school, I thought it would be a good move to buy a second bike, something other than our little cute scooter. So, I bought this 1977 Honda CB125 for a few hundred dollars. My reasoning was that it had the classic cool factor, and I could tinker with it to keep myself sane as Amy and I went to school to learn a new language as new arrivals in Indonesia. (NOTE: bikes in Indonesia don't really get bigger than 250cc as the taxes and fees go up exponentially for larger engines. It seems the old Honda 90's, 100's and 125's were quite popular back in the day). 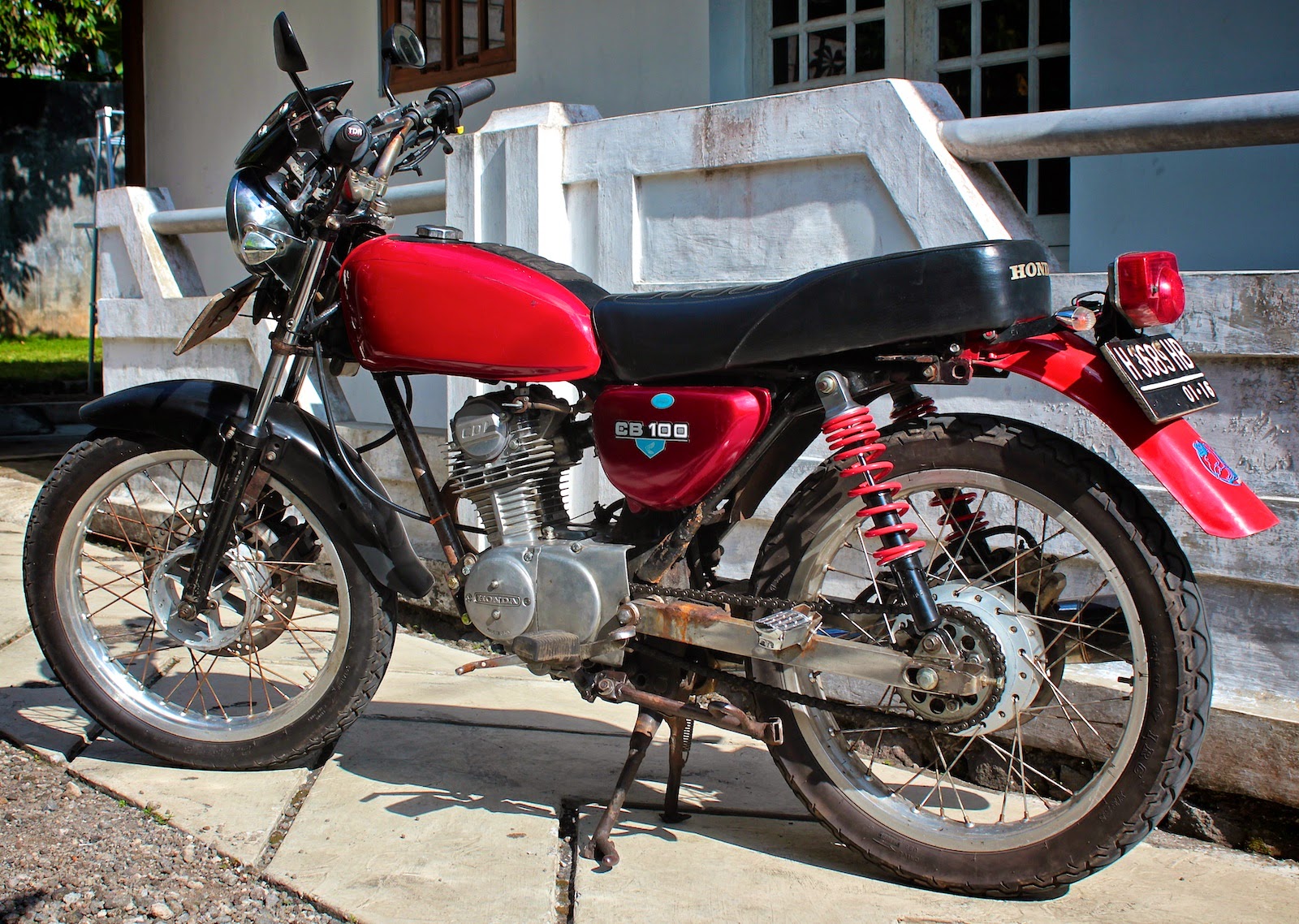 I know it doesn't look that bad in the picture above, but it was corroding, worn out, or just needing replacement in almost every location. It had been patched back together many times over the years, using whatever was available to do so. My fellow MAF friend Jon Chin had already started rebuilding a motorcycle, so from his bad influence one thing led to another and before I knew it my bike was in pieces.

Below is the frame getting ready for some paint. The fender is not normally welded to the frame, but at some point this one got "modified". I remember strapping the frame as pictured below to the back of my scooter and taking it to a Tukang Las / Tukang Cat (Painter / Welder) to do a little fixin' & painting. 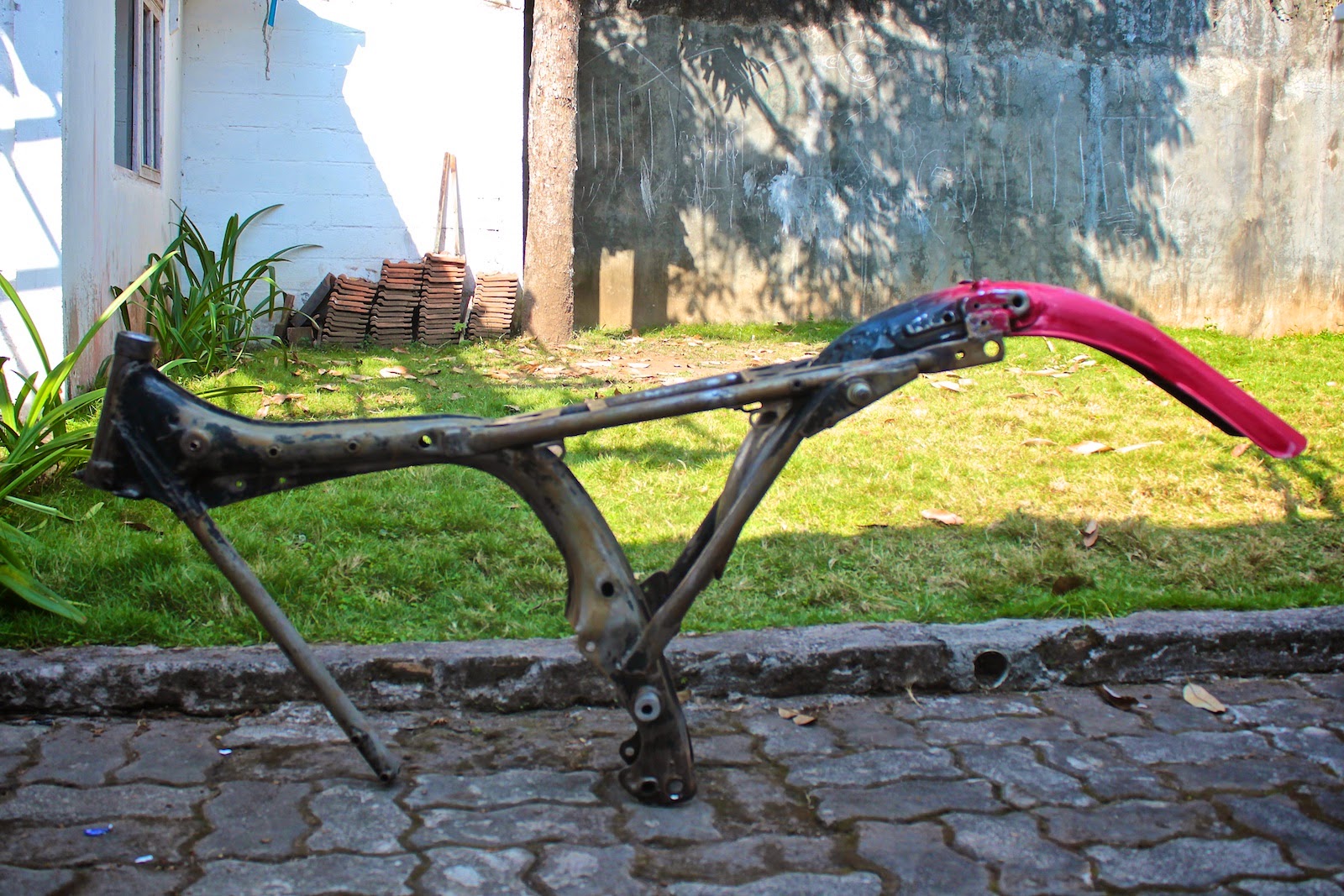 Below is how it left Central Java. The engine was rebuilt with a bigger 200cc cylinder from a Honda Tiger, and that is where the forks and electric cables came from as well. 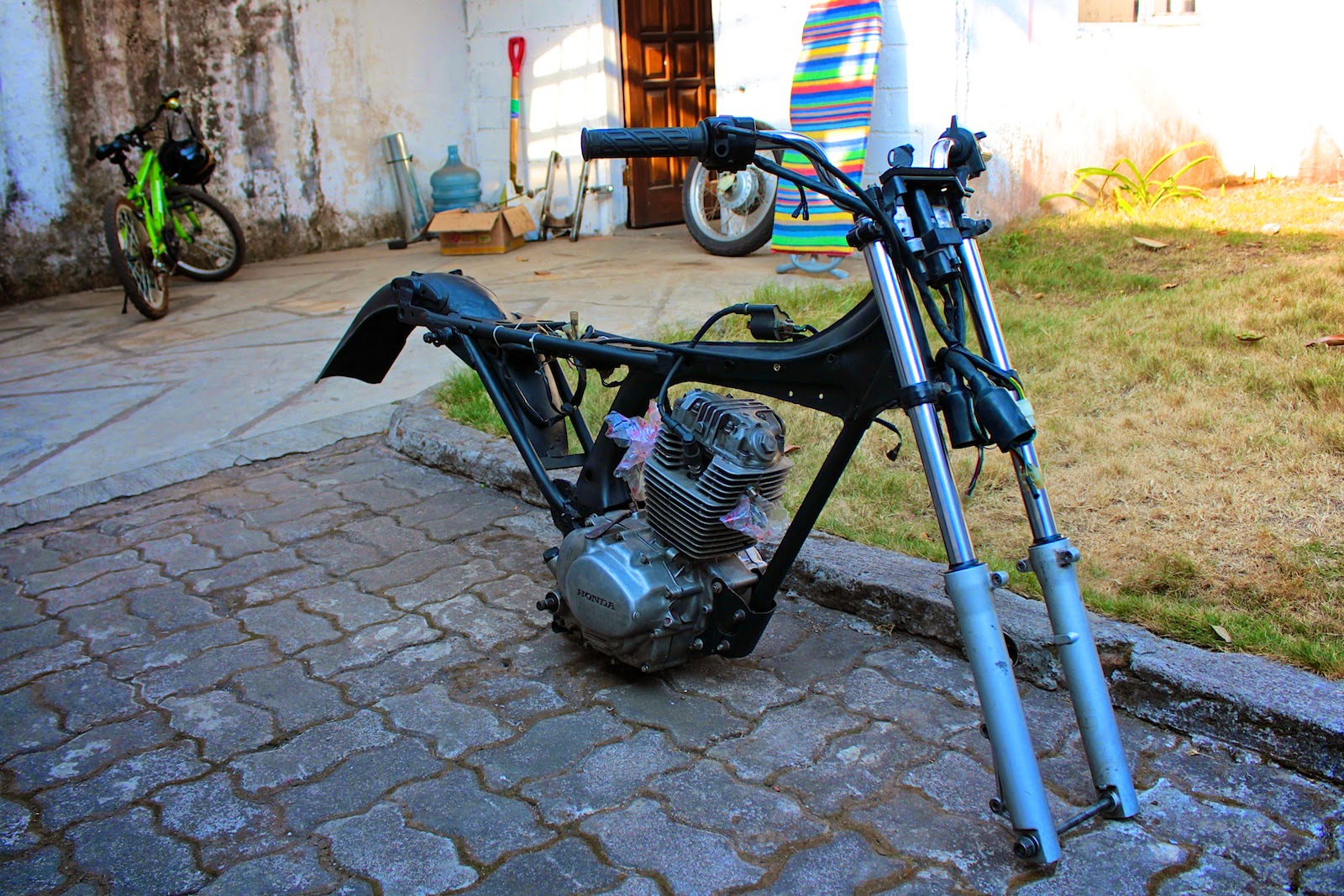 Maybe 1.5 yrs later, and I'm ready to continue on with the project! After-market parts for scooters & motorcycles are plentiful in Indonesia, and the price is usually right even if the quality is not quite there. So, I bought this aluminum swing arm and made it work (after a lot of grinding and fitting), as the swing arm I replaced was not original. I also removed the back fender and attached it with bolts, a little more like it originally was. As this bike is a mixture of original, Honda tiger, and after market parts, pretty well nothing fits together without modifying it!

Part of doing a project like this here is to see what you can do with what you have. If that means painting out in the open with flip flops on, or using a grinder when a machine shop would be more appropriate - so be it! It's Indonesia. The resourcefulness of the people here and their ability to make things work with what I would consider to be very little is admirable. This part of having a bike to tinker with is pretty neat, as in language school I was able to use a shared interest with local guys as an avenue to learn a little bit about them, and how they do things differently. 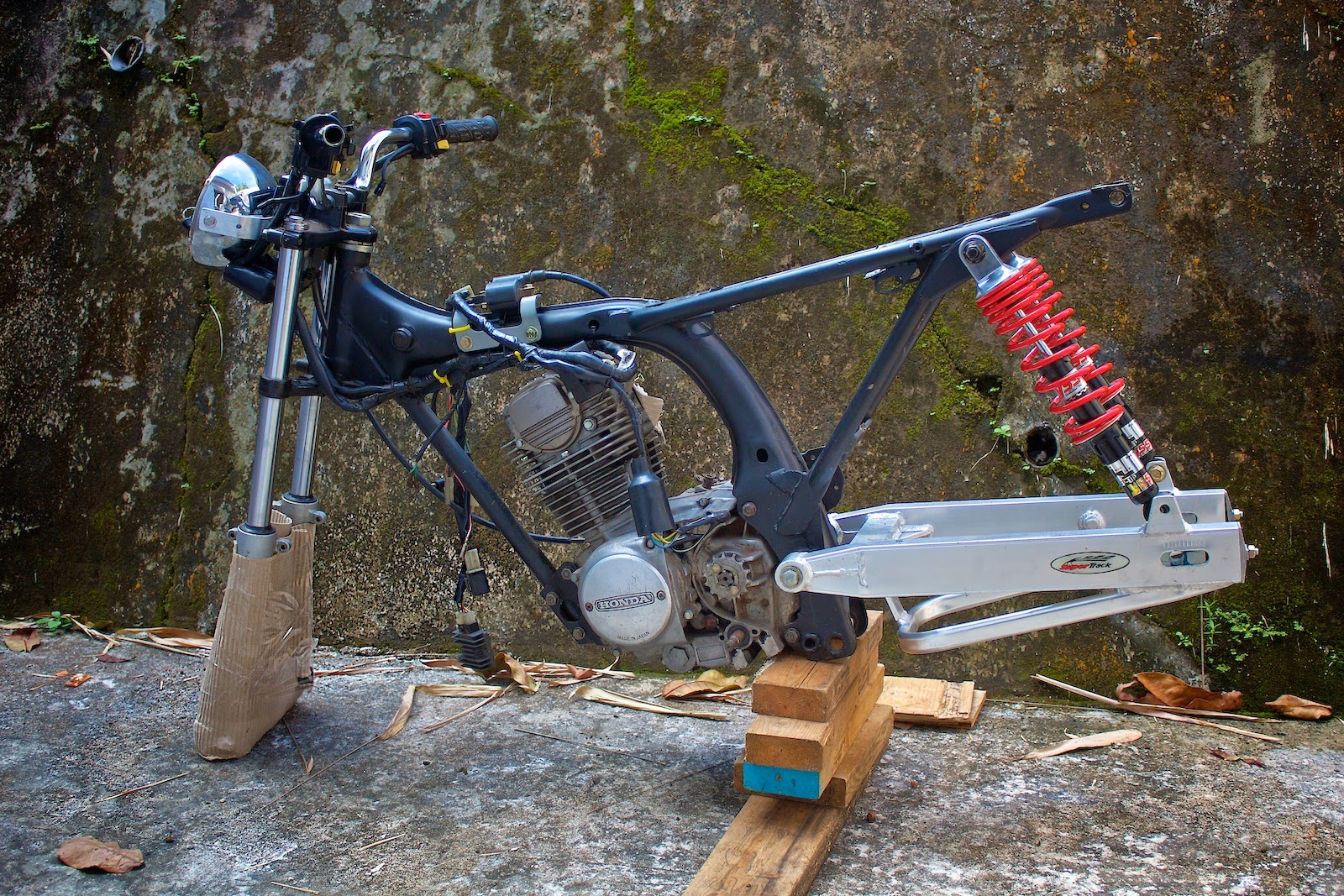 I must say, what we call "culture" and the differences between said "cultures" is amazing how it affects us so deeply. Amy and I have been here for over 3 years, and it still seems that we are infants in our understanding of how things are done here. In fact, I think we've learned the art form of just accepting things we don't get (maybe with a little humour instead of frustration), rather than asking "why". You could even say our strong desire to ask "why" to things we don't understand is cultural. Actually, I'm pretty sure it is to some degree!
Writing this about our journey learning culture, I'm reminded of the largest, most intense, and most foundational journey of learning I've been on since arriving here, and that is the Gospel of Jesus Christ. I was only 4 years old when I first knew Jesus; when I grasped in my young little head who I was, who Jesus is, and that I needed Him. I knew it, I believed it to be true, and yet in ways here in Indonesia I feel more like a child now. As I pull back a layer - as one would peel an orange - I find another layer underneath, and I realize a little more how deep the love of Christ runs, how needy I am for His grace, and how the seemingly basic runs down into the depths, beyond what I can fathom. It exposes me, a little more, then a little more. I become more aware of my imperfection, my sin, neediness. It exposes God to me; His Justice, His holiness, His righteousness, and my lack thereof.
And underlying it all, it exposes a love and grace that permeates everything, that can fill up and sustain and satisfy like nothing else. It is like we were created to be recipients of this grace; an unwarranted love. Just to write this is convicting, yet it also gives me a joy and a peace, as I know where there is conviction there is also an ongoing grace that is new each morning. There is so much I don't know, but I do know Jesus Christ. And I know He will continue to show more of Himself to me. Unlike me not quite getting this old bike perfect, I know God is faithful to finish what He said he would, and that is to continue His good work in my life, until the day of completion. 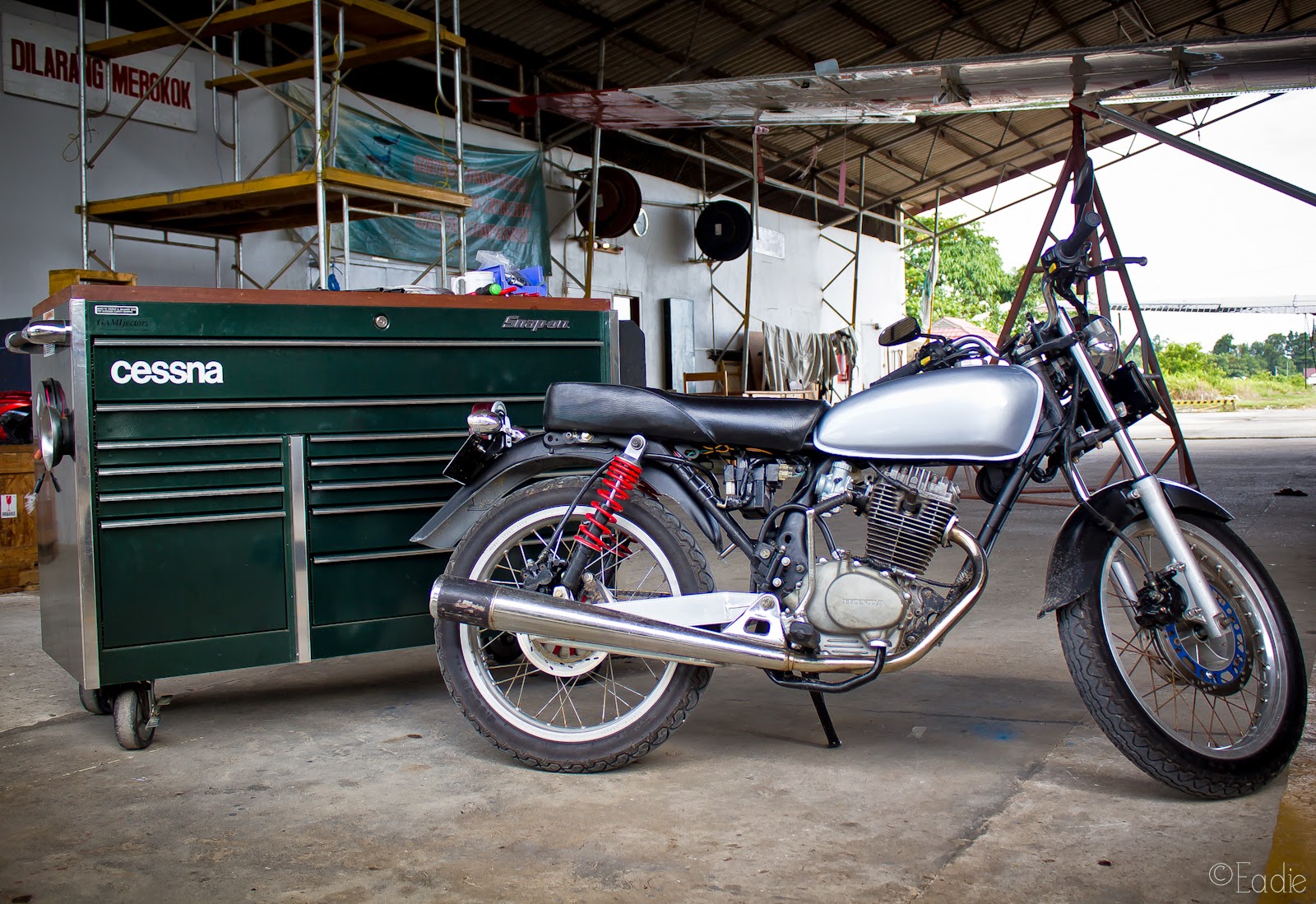 So it only took 3 yrs to get this bike to this point. And even as I write, it is parked once again with an electrical issue that is going to take a bit of time to figure out and fix. Bah! One day I'll get the gumption to work on it some more, but for now fixing airplanes seems to be enough for one day! 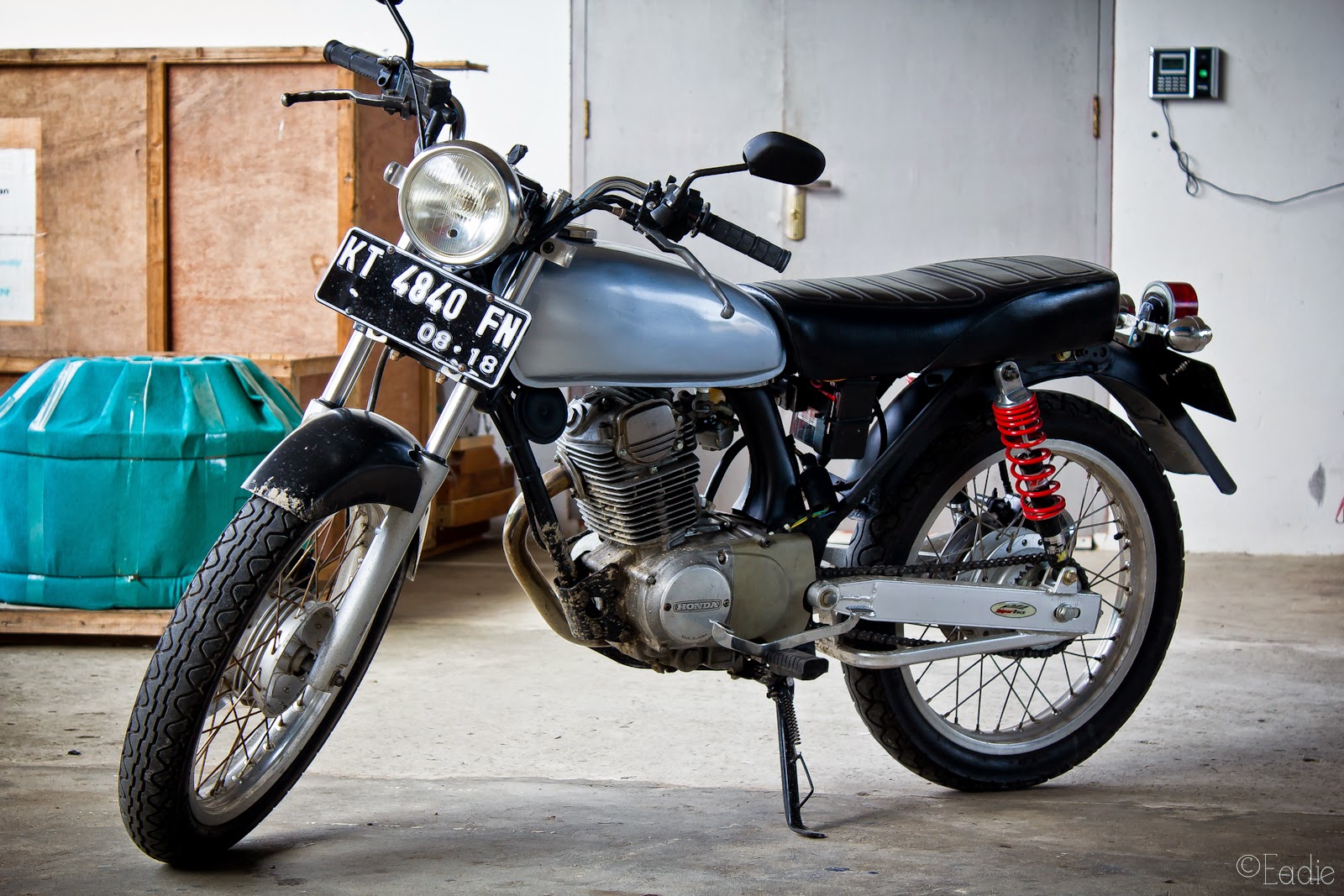